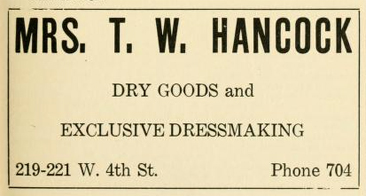 Molly McCoy Hancock, operator of a custom dressmaking shop in Winston from about 1885 to 1945, was one of the few Americans and possibly the only North Carolinian ever to merit the title of "modiste" or "couturiere." Known affectionately as "Madame Hancock" or simply as "Miss Molly," she reigned for some sixty years as fashion arbiter and creator of designs for a clientele from a wide area in North Carolina. She was reported to have sent dresses and trousseaux as far away as California and, at least in one instance, to China.

Madame Hancock was the daughter of Josiah Kirksey McCoy, a Confederate soldier, and Elizabeth Ellington McCoy of Reidsville. Mrs. McCoy, who wove her own cloth, owned one of the first sewing machines in her area; it had no foot pedal and while one hand guided the cloth, the other cranked the wheel. Mollie McCoy and her five brothers and sisters attended the Reidsville Academy; afterwards, she entered the Reidsville Female Seminary where her talent for fashioning clothes emerged. She designed her own as well as those of her three younger sisters and even some for her classmates. Later she took courses in fashion design in New York City and opened a shop in Reidsville. On 28 June 1884 she married Thomas Wheeler Hancock, a tobacconist; they had one son, Thomas W., Jr.

After her marriage, "Miss Molly" and her husband lived in Winston where she opened a dressmaking shop. She made everything from christening gowns to shrouds, and her shop eventually occupied the entire second floor above Owen's Drug Store.

Thomas Hancock proudly referred to his wife as "the madame"; from this came the name by which she was to be known by many of her clients and friends. Madame Hancock made regular trips to New York to purchase fabrics and paid large sums of money in order to copy original creations from such Parisian design houses as Poiret and Patou. At the beginning of World War II, she had some forty seamstresses executing her designs. One employee did nothing but iron; another was saleslady for accessories. Madame Hancock trained Allan Chambers to assist her in designing the clothes for which her shop became famous.

In an interview shortly before her death, Madame Hancock observed that modern women worked on their figures and did not leave it up to the dressmaker to hide their defects. "I really thought the bustles were pretty and elegant," she said. "We made the skirts straight and tight in the front and draped them gracefully over the bustle in the back and sometimes it was just tied on. Sometimes the string broke, too!" The ugliest styles, she thought, were those of the period around World War I, when the short, long-waisted, shapeless frocks were topped with potlike hats down over the ears. "And nothing, to my mind, was ever worse than the sight of a bridal gown up to the knees in front with a long train trailing out behind!"

Madame Hancock was a member of the Methodist church and the Order of the Eastern Star. When living in Reidsville she was organist at Main Street Methodist Church. When her eyesight failed, she went to live in the Eastern Star Home in Greensboro. She and her husband, who died in 1915, were buried in Reidsville. She was survived by her son and several grandchildren and great-grandchildren.

What ever happened to the

What ever happened to the wonderful old Victorian culture? Why did it ever die when it was so potent and beautiful. I move for reverting to the Victorian days! Who's with me?!
-home healthcare in salt lake city, utah