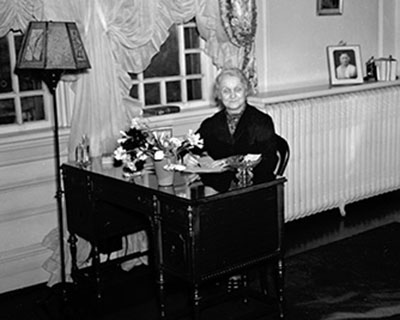 The only first lady of North Carolina to be the wife of one governor (Clyde R. Hoey) and the sister of  another (O. Max Gardner) was "Bess" Hoey. Margaret Elizabeth Gardner was born January 21, 1875, in Shelby to Dr. Oliver Perry Gardner and Margaret Young Gardner . Dr. Gardner was a widely respected country physician and prominent civic leader. At the time of her mother's death , Bess Gardner, then age sixteen, was a student at Shelby Female College; she soon became a surrogate mother to her younger brothers, and the care of children became a hallmark of her life.

On March 22, 1900, Bess married Clyde Roark Hoey, and they eventually became the par­ents of three children. Clyde R. Hoey Jr. was born January 19, 1901, and later married Bernice Hamrick and had one son; after Bernice died, he married Ruth Moore. Charles Aycock Hoey was born September 17, 1902, and subsequently married Mary Gidney and had two daughters and a son. Isabel Young Hoey was born January 26, 1907, and, a few months after her mother's death, married Daniel M. Paul; the Pauls had two sons.

Although Bess Hoey taught for a time before her marriage, she preferred the role of wife and mother and viewed it as her greatest calling. After her husband was elected governor, she brought her nurturing , generous love of people to the Executive Mansion. Even before their move to Raleigh, Bess Hoey had made a name for herself as a speaker and was much in demand among various civic organizations. Her sphere of influence broadened to the entire state after her husband became governor. While Governor Hoey had a reputation as an excellent orator, his wife obviously had much the same gift. She spoke often on the subjects of highway beau­tification, women's roles, and the welfare of children. All her life Bess Hoey enjoyed amateur dramatics. 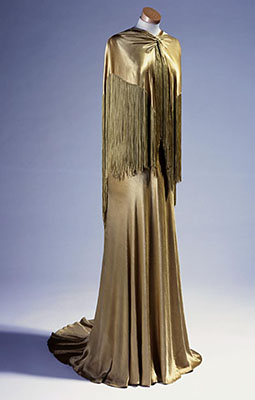 As the Raleigh Times (January 7, 1937) remarked:" North Carolina's new first lady, Mrs. Clyde Roark Hoey[,] graciously gay, witty and sympathetic, brings with her to the Executive Mansion a multiplicity of interests and experiences. Her popularity in the western part of the state-her home-is due to her exceptional love for people, her hospitality and her outstanding personality."

Bess Hoey certainly had the opportunity to exercise her skills as an accomplished hostess at the many teas, receptions, and dinners over which she presided while in Raleigh. The Hoeys' daughter Isabel, who lived with them, often shared hostess duties with her mother. Bess often employed her considerable talents as a cook. An article in the Charlotte Observer (February 14, 1942) said of Bess Hoey: "It was a plain, old-fashioned, homey household in which the humblest were heartily welcomed and quickly came to feel at ease in its congenial and affable fellowships. It was Mrs. Hoey who carried [to], and made to preside in the Mansion, the spirit of the common people, the social democracy of the common­ wealth."

Bess Hoey, always active in civic, social, and religious organizations, belonged to the United Daughters of the Confederacy and the Daughters of the American Revolution, as well as the Twentieth Century Book Players. She served also as president of the Woman's Club in Shelby. For many years she taught Sunday school and was so popular as a teacher that the class often had more than sixty members. One of her most lasting interests was in gardening, and her garden in Shelby was renowned for its beauty. She brought that interest with her to the Executive Mansion, watching over the mansion gardens and creating a greenhouse for exotic flowers at the state penitentiary. The Greensboro Daily News (December 13, 1936) quoted her as saying: "'My family was certainly named right, we were all born gardeners. My father was a doctor hut he only practiced medicine for a living; he farmed for fun."'

Margaret Elizabeth Gardner Hoey died suddenly of a heart attack on February 13, 1942, about thirteen months after her husband's term of office had ended and the couple had returned to Shelby. Bess Hoey was buried at Sunset Cemetery in Shelby. After her death, her devastated husband always wore a red rose or carnation in his lapel to honor her. Her husband's will established the Bess Gardner Hoey Memorial Fund, a trust administered for charitable, educational, and religious purposes. Bess Hoey did not live to see her husband, unique in his everyday attire of English walking coat, striped trousers, high starched collar, and flower in his lapel, become a United States senator in 1945.