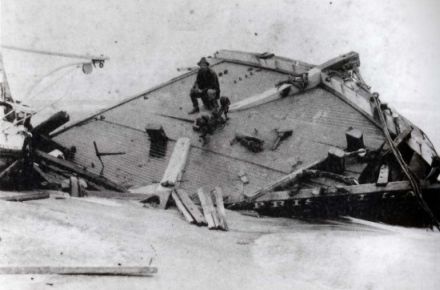 Geological evidence along the Outer Banks clearly shows that hurricanes have, for centuries, been frequent visitors to the state. The first severe storm recorded in North Carolina took place on 6 Sept. 1667, when strong winds and rain struck the Outer Banks, destroying corn and tobacco crops and demolishing some buildings. More detailed accounts from Virginia tell of the 12 days of rain that accompanied this storm. Later, in the mid-eighteenth century, severe storms along the North Carolina coast destroyed ships and flooded coastal towns. In one such storm in 1752, the town of Johnston, then the Onslow County seat, built in an area known today as Old Town Point (part of present-day Camp Lejeune), was completely destroyed, as were all of the county's records and deeds. Highly detailed reports of a hurricane that hit North Carolina in September 1769 tell of great destruction in the region from Smithville (present-day Southport) through New Bern. During this storm, the Brunswick County Courthouse was reportedly blown down, and the tide in New Bern rose 12 feet higher than average. Other hurricanes hit the New Bern area again in 1803, 1815, 1821, and 1825. Two major hurricanes in 1842 resulted in the famous "wet year" that saw massive destruction of homes, businesses, and crops. Throughout the nineteenth century, storm damage repeatedly affected areas of the North Carolina coast and sometimes inland as far as Winston-Salem.

In 1896 and 1899, two great hurricanes unleashed their full fury on Shackleford Banks. Most of the residents of Diamond City-the most populous of the five communities that developed on this nine-mile-long strip of the Outer Banks during the eighteenth and nineteenth centuries-had weathered many hurricanes, but these two storms were unlike any that had struck before. After the first of the storms sent seawater into gardens and homes, residents began to discuss openly the possibility of leaving the island. Several families moved, but most decided to stay.

The hurricane that slammed into the central coast of North Carolina in August 1899 was one of the worst ever to hit the area. It produced a storm surge that inundated everything on the island, save the tops of a few of the taller sand dunes. When the great storm waters subsided, Diamond City was a scene of utter devastation: the giant dune that ran through the village was gone; countless homes were either destroyed, washed away, or badly damaged; gardens, fruit trees, and other vegetation were covered with sand and salt water; sheep, horses, cattle, and other livestock had vanished; wells were laced with salt water; and cemeteries revealed uncovered caskets and human bones.

The Priscilla wrecked during the hurricane of 1899. Rasmus Midgett, sitting on the wreckage, saved ten people from the ship during the hurricane, Hatteras, NC.  Image courtesy of the NC Office of Archives and History, call #: PhC42_Bx6_Boats and Boating_F19. Accessible online via East Carolina University RENC:http://www.ecu.edu/renci/StormsToLife/SanCiriaco/index.html (accessed August 17, 2012).