Indian Museum of the Carolinas 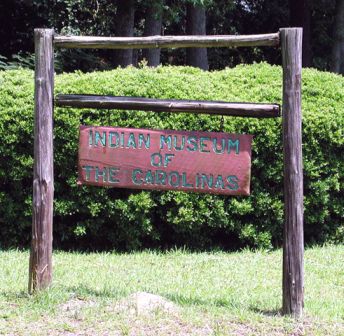 The Indian Museum of the Carolinas is nestled in a grove of pine, sweet gum, and white oak trees off Turnpike Road in Laurinburg. Opened in 1972 by a group of Scotland County citizens under the leadership of local anthropologist David McLean, this modest building holds treasures from North Carolina Native American communities, from prehistoric artifacts to contemporary arts and crafts. Although emphasis is placed on a nine-county area, the museum collections include items from other tribal groups in North America and South America. The stated mission of the museum includes two major goals: to educate the public through the preservation, exhibition, and interpretation of artifacts from the native peoples of North Carolina and South Carolina, and to further archaeological research in the Carolinas. In addressing these goals, the exhibit area in the museum provides an eclectic but interesting group of displays.

There are two major exhibit areas in the museum: the front room at the entrance focuses on North Carolina Native American history, and a second area includes rotating displays on North Carolina Indians and other tribes. From the exhibits and their interpretations, a visitor can learn about topics ranging from native foods such as nuts, fish, and cattails, to planting corn with digging sticks, playing stickball, and the role of the shaman in religious and healing ceremonies. Reflecting the Indian worldview, displays are arranged in a more circular or topical fashion rather than in a linear, chronological mode (from prehistory to the present). Because McLean was also an archaeologist, a major component of the museum's collection is prehistoric artifacts, including thousands of projectile points, stone tools, and pottery shards. However, the more recent displays depict the contemporary life of local tribes, particularly the Lumbee and the Catawba.

In addition to the exhibits inside, a seasonal Native American garden featuring plants used by the native population for food, medicine, and textiles is located on the perimeter of the museum grounds. The garden, a favorite of local students, not only serves as an instructional tool but is instrumental in research.

Southeastern North Carolina is often overlooked as an area of Native American history and culture, although the Lumbee tribe in Robeson County is the largest Indian tribe east of the Mississippi. Since its creation, the Indian Museum of the Carolinas has taken the challenge of remedying this oversight. By bringing attention to the rich heritage of the Native American peoples of this region, the museum provides the opportunity for North Carolinians to increase their knowledge and enhance their appreciation of one of the diverse cultures of the region and state.

Mark A. Mathis and Jeffrey J. Crow, eds., The Prehistory of North Carolina: An Archaeological Symposium (1983).

Indian Museum of the Carolinas: http://www.learnnc.org/lp/pages/2086

My wife collected over 50 CD

My wife collected over 50 CD's of Native American music. Now that she has died, I was wondering if you might be interested in these as a gift, either for your own collection or as gifts to friends of the museum.

Hello, I have a collection of

Hello, I have a collection of Native American Art u may be interested in. I have oil paintings on canvas, all signed by the artist. They are all originals, no prints or copies. I have a Native American bone chest plate, jewelry, rabbit pelts, rabbit pelt dreamcatchers & peice pipes. If intetested plz. Contact Bob Thank I for ur time.