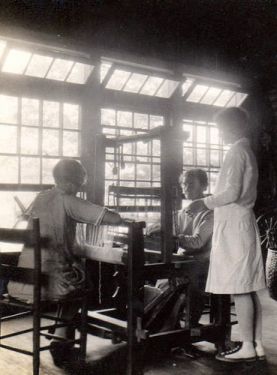 The John C. Campbell Folk School is located in Brasstown, near the town of Murphy in western North Carolina (Cherokee County). Named for social worker and writer John C. Campbell, the school was founded after Campbell's death in 1925 by his wife, Olive Dame Campbell, who served as the school's first director until her 1946 retirement, and Marguerite Butler. John Campbell's extensive study of the culture, conditions, and needs of Appalachia served as the basis for the school's work. The curriculum has historically focused on four main areas, each of which has received varying degrees of emphasis during different eras: traditional performing arts, especially folk music and dance; "creative making," which encompasses a wide variety of arts and crafts both native to the local area and from other regions; studies connected to the natural world, including agriculture and forestry; and cultural awareness studies such as history. Students learn in group settings and develop a variety of skills.

The year 1973 signaled a change in the history of the John C. Campbell Folk School and the beginning of its modern structure. Gus and Maggie Masters, who had been heads of the craft department, took over as codirectors and redirected the school's emphasis toward crafts, modeling the program on other craft schools that used resident artists rather than a fixed faculty. They sold the school's dairy herd and began converting farm buildings to crafts studios. An October fall festival was also established during the Masterses' tenure and became the largest annual event in Cherokee County.

Ronald G. Hill, a native of Cherokee County, became the director of the John C. Campbell Folk School in 1985. He brought his experience as Cherokee County manager to bear on the school, developing a more stable fiscal plan and carrying out numerous improvements to the buildings. In 1992 Jan Davidson, a folklorist from Murphy with an interest in the handicraft movement, became the director. The school continues to offer noncompetitive classes in crafts and music to students from all over the United States as well as to local citizens.

David E. Whisnant, All That Is Native and Fine: The Politics of Culture in an American Region (1983).