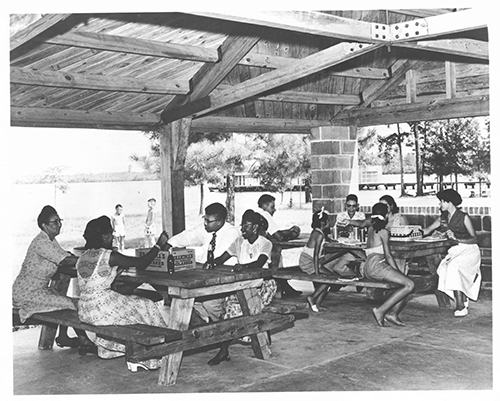 The bay lakes region of Bladen County was settled during colonial times. Jones Lake was originally known as Woodward's Lake, named for Samuel Woodward, a justice of the peace in the mid-1700s. The lake was later renamed for Isaac Jones, a landowner who donated a tract of land on which Elizabethtown was established in 1773. Located just to the northwest, Salters Lake received its name from Sallie Salter, a Revolutionary War heroine who spied on the Tories encamped in town.

For approximately 100 years after the area was settled, landowners practiced farming along the river lowlands and creek bottoms. Longleaf pines, then prolific in the area, were used for the production of naval stores, primarily providing turpentine, pitch and timber. Due to the growth of the turpentine, lumber and cotton industries, the area's human population soon increased beyond the soil's capacity to support it. By 1935, with the fall of the cotton farmer and the exhaustion of industry, large segments of the population found themselves on submarginal land.

During the Great Depression the federal government put people to work and poured millions of dollars into conservation by building public parks. Some parks, like Jones Lake, were created by Depression era federal Farm Resettlement projects that acquired spent and blighted land from farmers and resettled farm families in other locations.

The federal government purchased submarginal farm lands in the Jones Lake area at an average cost of $4.51 per acre, and the Resettlement Administration managed the area from 1936-1939. In order to stimulate the depressed economy, a program of land conservation and utilization began. With local materials and talents, the Resettlement Administration developed a recreation center at Jones Lake. A large bathhouse, beach, refreshment stand and picnic grounds were constructed.

The property was turned over to the state of North Carolina on July 1, 1939, for operation under a lease agreement. In October 1954, the land was permanently deeded to the state. Jones Lake opened in the summer of 1939 as the first state park for African Americans and achieved immediate popularity. Between 1961 and 1964, North Carolina's state parks were desegregated.

Besides serving as a source of recreation, the park has played other important roles in the area's history. During World War II, Jones Lake was open only for picnicking and fishing while the area was used by the Anti-Aircraft School from Camp Davis for special training programs. In the spring of 1970, the area achieved prominence when astronomers gathered there to view a total eclipse of the sun.

Jones Lake State Park consists of 2,208 acres that include Jones Lake (224 acres) and nearby Salters Lake (315 acres). Both of the lakes are Carolina Bays, elliptical depressions found primarily in the coastal plain of the southeastern United States. Called bays because of the sweet bay, loblolly bay and red bay trees found growing in and around them, most Carolina bays are small – less than 500 feet long – and no longer contain open water. Instead, over time the lakes have filled with wet organic soils and have become overgrown with pocosin vegetation. Both Jones and Salters bays contain open water. The Jones Lake bay is approximately 8,000 feet long, and Jones Lake has a shoreline of 2.2 miles.

Both lakes have a raised sand rim around their southeastern shores. The lakes are fed by precipitation, and the shallow water is highly acidic and contains few plant nutrients. Although water quality is excellent, the water is dark colored due to decomposing plant matter, called peat, found on the lake bottom.

Jones Lake State Park has diverse natural communities with typical bay vegetation. Evergreens, including sweet bay, loblolly bay and red bay, are predominant. Because the bog around the lake, also called a pocosin, has poor drainage and is subject to flooding and drought, the area has few herbaceous plants. Sheep laurel, blueberry and fetterbush thrive in the acidic soil. Pond pine and Atlantic white cedar are common in the bay forest. These trees usually do not reproduce in such shaded areas, but natural fires have burned the underbrush, allowing their growth. Today, prescribed burning is essential for the perpetuation of these communities. Without fire, the character of these vegetative communities would eventually change.