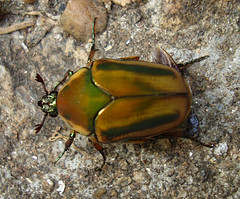 Junebugs, more properly called green June beetles, are common to North Carolina and other southeastern states. The insect emerges in June and July from its larval form into an adult beetle averaging slightly less than an inch in length. A noisy flyer, the junebug is a metallic green with a dusky yellow along its sides. It feeds on pollen, ripening fruits, and a variety of leafy garden and ornamental plants.

Though hated by gardeners and farmers-the larvae are especially destructive of tobacco plants-junebugs were once a source of recreation to North Carolina children, who in bygone days delighted in flying them around on kite strings fastened to the insects' sturdy legs. With several such self-propelled projectiles in flight at the same time, the string-pulling pilots staged aerial dogfights, complete with sound effects worthy of the war movies that inspired their games.

I have beetles flying around

I have beetles flying around my backyard that look exactly like this, but they are almost 2 inches long. Are they the same ones and just having a good year? They love to land on you if you stand still in the yard, and the colors are beautiful!

My daddy taught me how to fly

My daddy taught me how to fly the june bug on black thread. His daddy taught him. I taught my kids. Don't believe parents take the time with their children anymore.