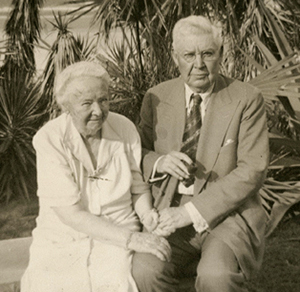 The Kate B. Reynolds Charitable Trust is a philanthropic foundation created in 1947 and based in Winston-Salem. By virtue of the intent of its donor, the trust is dedicated to improving health care for the indigent and medically underserved people of North Carolina and to helping the poor and needy residents of Winston-Salem and Forsyth County. The trust was established in 1947 by the will of Kate Gertrude Bitting Reynolds (1867-1946), the wife of William Neal Reynolds, chairman of R. J. Reynolds Tobacco Company.

Kate Reynolds designated that one-fourth of the income from the trust be used for the poor and needy in Winston-Salem and Forsyth County and that three-fourths of the income be used for charity patients in North Carolina hospitals. These designations have become known as the Poor and Needy Division and the Health Care Division, respectively. In 1970 the trust successfully appealed to the North Carolina Supreme Court for the ability to expand the latter designation to include broader health care needs in the state.

In its first 50 years, the Poor and Needy Division of the Reynolds Trust granted more than $39 million. The Health Care Division has made an additional $119 million in grants for programs throughout the state. Programs have included a focus on health care for the elderly, mothers and infants, people with AIDS, and the disabled, among others. The trust has also worked to provide increased access to health care in the state's rural areas and supported health education, including nursing programs at community colleges. It has often worked in collaboration with other foundations dedicated to improving the lives of North Carolinians, including the Duke Endowment and the Z. Smith Reynolds Foundation.

The Kate B. Reynolds Charitable Trust's assets more than doubled in 1989 when the R. J. Reynolds Tobacco Company was sold in a leveraged buyout. In the early 2000s the trust's assets were more than $470 million, and the organization designates about $24 million annually in grants through its two divisions.

Jan Johnson Yopp, A Legacy of Caring: The Kate B. Reynolds Charitable Trust (1997).