Mary Lea Simpkins grew up around one of the state's oldest grist mills, the Yates Mill just off Lake Wheeler Road south of Raleigh. For more than 200 years the Yates Mill ground meal and flour for local farmers, and Simpkins' father, John Daniel Lea Sr., was the miller there from 1898 to its closing in 1953. Simpkins often helped her father in the mill but mostly enjoyed a childhood spent playing in the mill's attic and along the shores of the millpond.

Water-powered mills like the Yates Mill once thrived in nearly every community. By damming creeks and channeling their flow, mill builders used nature's power to turn a waterwheel that moved belts, pulleys and cogs that whirled heavy millstones to shear the corn and wheat. In the days before electricity and gasoline, mills furnished clean, abundant energy, and villages and towns often sprouted up around them.

The Yates Mill has been called the "queen" of the state's grist mills because of its wonderful state of preservation, including much of its original machinery and two pairs of millstones. Currently being restored by a local community group as the centerpiece of a new county park, the mill will soon host schoolchildren and other visitors who want to learn about the workings of one of the most common, but often forgotten parts of daily life in our past.

And if those visitors are lucky, Mary Simpkins will drop by and remind them that a mill wasn't just a place of business, but a place for summer joys like picnicking, fishing and falling in love. 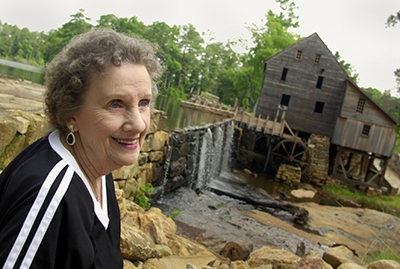 Seward, Chris. "Mary Lea Simpkins."  Photograph. 2001. To request permission for further use or to purchase a print, please contact the News & Observer.