Immediately following the Civil War, many southerners began paying nostalgic tribute in print and in public to the Old 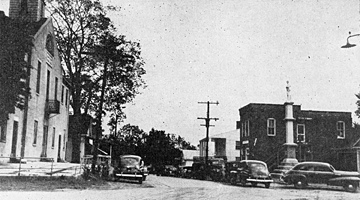 South and the Confederacy, which became popularly known as the "Lost Cause." Through magazines and monuments, reference to the Lost Cause eased the sting of defeat, providing a source of pride through its tales of Confederate military bravery. The Lost Cause, however, also served as a vehicle for easing the South forward into a new, unknown era. Leaders of the New South paid tribute to the Lost Cause to assure their reluctant fellow southerners that the region could accommodate change within "traditional" southern values. In both uses of the Lost Cause, whether easing the hurt or escorting the present into an uncertain future, North Carolinians played prominent roles.

In 1866 former Confederate general Daniel H. Hill began publishing a journal, the Land We Love, from Charlotte. In its initial editions, the Land We Love tread difficult waters, honoring the Old South yet offering a critique of its shortcomings. But the publication became more defiant as Reconstruction-era policies disenchanted an increasing number of white southerners. Another publication, Our Living and Our Dead, appeared out of New Bern and then Raleigh between 1873 and 1876. It fit the more commonly understood role of a Lost Cause magazine by focusing on military matters to prove that the North did not so much win the war as the South ran out of men and matériel. The magazine also accused northern authors of partisanship and urged southerners to read only southern authors and teach only the southern view of the prewar crisis and the war itself.

The Lost Cause can still be seen in the hundreds of statues commemorating Confederate soldiers on the town squares and college campuses of North Carolina. Often funded by groups such as the Sons of Confederate Veterans and the United Daughters of the Confederacy, most of these statues were erected in the late 1800s and early 1900s. Appearing during a bleak period in the state's race relations, the statues were both celebrations of the reestablishment of white supremacy and tributes to Confederate heroes whose living representatives were steadily dwindling. These monuments continue to spark discussion and, at times, controversy among North Carolinians. Those disturbed by their presence view them as highly objectionable symbols honoring slavery and racial discrimination, whereas the monuments' defenders prefer to see in the often nameless image of the common soldier themes of bravery and a willingness to defend one's home from invasion. The Lost Cause continues to generate strong passions arising from North Carolina's complex heritage of bravery and slavery, defeat and emancipation. As the war itself was a hotly contested struggle, so too remains its memory and its meaning.