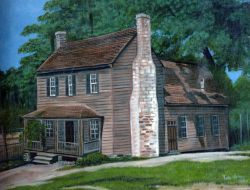 North Carolina General Assembly on 27 Dec. 1814 and opened with 23 students on 23 Aug. 1815. The first principal of Louisburg Female Academy was Harriet Partridge Bobbitt, who served from 1815 to 1820 and again from 1832 to 1842. A newspaper notice of the school's opening indicated tuition as follows: "for spelling, reading, writing and plain needle work, $4 per quarter; English grammar, Arithmetic and Geography, $5 per quarter; Painting, drawing and embroidery, $6 per quarter."

Asher H. Ray and his wife, Jane Curtis Ray, took charge of the academy in 1843, and from 1851 to 1857 they advertised the institution as Louisburg Female Seminary. The four-year regular course at the seminary consisted of English grammar, arithmetic, geography, history, physiology, chemistry, moral philosophy, geometry, logic, "Elements Criticism," "Geography of Heavens," geology, mental philosophy, and "Evidences of Christianity." Students paid extra for classes in piano, guitar, drawing, painting, French, Latin, and Greek. For $40 per session, they could room in the Rays' spacious home adjacent to the academy.

The female seminary prospered, and steps were taken between 1855 and 1857 to transform it into Louisburg Female College. Although Asher Ray owned stock in the Louisburg Female College Company, he died prior to its opening in the fall of 1857. Moved to a location south of the new college building, the old female academy building survived until 1927, when it was destroyed by fire. The Ray home, known as the "Person Place," is a preservation project located on the Louisburg College campus.