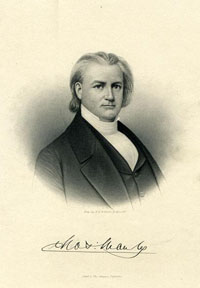 Charles Manly (1795-1871) presided over the decline and fall of the Whig Party in North Carolina. The son of Basil and Elizabeth Maultsby Manly, he was born on May 13, 1795 at Oak Mont, the family home near Pittsboro. His early education came from black educator John Chavis, who was hired by Basil Manly to teach his sons, and at Pittsboro Academy run by William Bingham. He enrolled at the University of North Carolina in 1811 and graduated with honors in 1814. While studying law in Raleigh, Manly earned a living tutoring the children of State Treasurer John Haywood. He was admitted to the bar in 1816. In 1817 Manly married Charity Hare Haywood of Raleigh. They would be the parents of eleven children.

In 1823 Manly served as clerk to the commission to settle claims against Great Britain under the Treaty of Ghent. The following year he was appointed assistant clerk to the House of Commons, an office he held until 1830 when he was made the principal clerk. He tended to that duty for the next seventeen years except for the 1842-1843 session. Meanwhile, he was serving as treasurer of the board of trustees for the University (1821-1849) and was invited to deliver the first annual address to the Alumni Association in 1838.

Manly joined the Whig Party at its formation and was the choice to succeed Governor William A. Graham in 1848. He narrowly defeated David S. Reid in the general election and took the oath of office on January 1, 1849. His administration was not particularly notable since most of the Whig initiatives had been started under the three previous administrations. Manly maintained support for internal improvements and public education while also calling for a statewide geological survey. He assisted efforts to preserve the state's colonial history by collecting documents housed in London. He also proclaimed the first Thanksgiving Day in North Carolina: Thursday, November 15, 1849. His message to the General Assembly in 1850 foreshadowed the dilemma facing many Whigs in North Carolina. He warned of dangers in the separation of the South from the Union and urged state leaders to avoid secession. Yet, at the same time, he vowed that the South should never surrender its constitutional and moral rights in an effort to change Southern destiny.

Charles Manly's election in 1848 was the last victory for the Whig Party. His bid for re-election in 1850 failed as Democrat David S. Reid won by almost 3,000 votes. With his political career over, Manly returned to a successful law practice in Raleigh. He was again selected as secretary-­treasurer of the board of trustees of the University of North Carolina in 1851 and served until the Reconstruction government took control of the university in 1868. He held that post for a total of forty-five years.

In retirement Manly lived on his “Ingleside” plantation, comprising 1,060 acres, east of Raleigh. In April 1865 troops under command of Gen. William T. Sherman pillaged his home and storehouses. After a long illness, one that left him blind, Manly died at his mansion on May 1, 1871. He was buried in the City Cemetery with only his name and life dates inscribed on a simple tombstone.