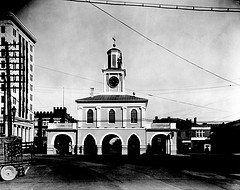 Markets in colonial North Carolina were a 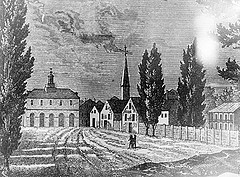 part of the English tradition brought by early settlers. As early as the thirteenth century town markets in England offered opportunities to buy and sell. North Carolina's first town, Bath (chartered in 1705), had a town common where fairs and markets were held. In the 1720s the colonial Assembly passed acts to create marketplaces in towns, and in 1731 Governor George Burrington's commission empowered him to establish fairs and markets.

Some courthouses and, occasionally, municipal buildings had open space underneath them for public markets. Early market houses existed in Charlotte, Edenton, Fayetteville, New Bern, Raleigh, Salem, and Wilmington. Maps, plans, and documents for other places contain references to streets named "Market," clear evidence that they were common. Wilmington and New Bern had separate fish markets, and Salem by 1803 had a meat market that was open twice a week. The Kinston Journal on 30 Dec. 1878 announced the pending opening of a large town hall built over a market house. Municipal, county, and state governments continue to provide market space to the benefit of both producer and consumer.