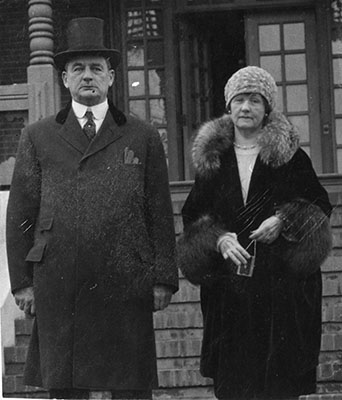 Having become a savvy entertainer and hostess at home in Lumberton, Margaret Jones French McLean was at ease and enjoyed the opportunities presented to her while first lady. She was accustomed to large gatherings of family, friends, and business and political associates of her husband. The McLeans were prominent and prosperous residents of a small rural town, and there had been many opportunities for Margaret McLean to offer her creative hos­ pitality to a variety of guests. To her disappointment, however, she was unable to attend the most elaborate inaugural events inasmuch as she was afflicted with pneumonia at the time. In her absence Governor McLean asked Lieutenant Governor and Mrs. J. Elmer Long to stand in their places.

Although Angus Wilton McLean was inaugurated governor in January 1925, Margaret McLean and the couple's three children did not arrive in Raleigh until April of that year. During the months between the inauguration and his family's arrival,  Governor McLean had arranged to have the Executive Mansion evaluated for extensive renovation. Inspections uncovered problems involving heating, plumbing, and cleanliness at the residence. When the few furnishings were found to be in disrepair, Harry Pier Giavina, a professional interior decorator of Wilmington, worked with Margaret on the interior repairs; those improve­ments took nearly two years to complete.

The McLeans were married on April 14, 1904, following a seven-year courtship. The intimate wedding was held in the Robeson County home of  Margaret's maternal grand­parents, Berrr and Martha Faulk Godwin. After Margaret's parents, James McD. and Edna Godwin French, divorced, her grandparents reared her. Her mother remarried and moved to Greensboro, leaving Margaret and her brother with their grandparents. Her lengthy courtship with Angus Wilton McLean began when he was beginning his law practice and she was attend­ ing the North Carolina State Normal and Industrial College (now the University of North Carolina at Greensboro). She went on to advanced studies at a music conservatory in Boston. 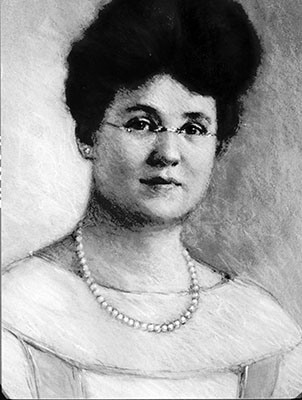 Margaret McLean guarded her privacy and that of her family, finding it hard to become close to people. She was very reserved and dignified in her manner, and her strict upbringing served her well as the wife of a prominent businessman and public servant. She was accus­tomed to formality and propriety in her relations with household staff and guests alike.

By 1908 the McLeans had built Duart House, their majestic neoclassic, columned mansion, on the site of the former Godwin family home. Within the walls of that elegant house they reared their three children. Angus Wilton II was born on January 13, 1913 (died October 21, 1996), Margaret French (Mrs. W. Scott Shepherd) in September 1915, and Hector (later mar­ried Lyl Warwick) on September 15, 1920. Because of the grand scale (ten thousand square feet) of their home, entertaining and hosting overnight guests were frequent occurrences.  Margaret McLean took great pride in gracious and creative events, from holiday and birthday par­ties to business and organizational meetings. She also enjoyed experimenting with foods and creating recipes. Although she did not cook, she could instruct others.

Margaret McLean brought at least one servant, Rosetta Ross Martin, with her to the mansion, who took care of young Hector. The first lady inspired servants to expand their abilities. A butler known as Uncle Dave began arranging flowers with a very creative flair. There was no housekeeper, so Margaret McLean executed the planning of events and purchasing of household supplies. A secretary, probably from the governor's office, was loaned to her to assist
in addressing invitations.

The first lady supplemented the furnishings and table settings with the McLeans' own col­lection of china, silver, and crystal. She established a dining area on the second floor of the Executive Mansion so that the family could eat together upstairs. She also had the open east porch over the garage screened so that the family could sit there in comfort and privacy.

Margaret McLean never made public speeches but did make a few public appearances with her husband. She had formal teas for the calling public on Wednesday afternoons.Traditionally, entertaining at the mansion was done in categories - legislators in one group and ministers in another, and so on. Margaret McLean decided to mix various types of people and found it more interesting for her guests. 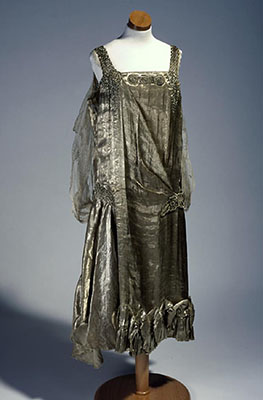 She had an innate sense of correctness and style that served her well. Her dramatic flair and taste were well known, and she thoroughly enjoyed being around some of the important guests such as President and Mrs. Calvin Coolidge and entertainer Will Rogers.

Three parties illustrate her skills. One was a statewide traditional New Year's Eve recep­tion and open house for which she decorated the dining room table with a complex snow scene; three thousand guests attended. Another was a springtime event for the United Daughters of the Confederacy at which the ballroom was transformed into an elaborate gar­den complete with trees, scrubs, flowers, and fountain. In honoring invited Daughters of the American Revolution, Margaret McLean decided to entertain them on George Washington's birth­day and decorated the dining room table with a realistic depiction of Washington crossing the Delaware River. Following her large and elaborate parties, she allowed the children to have their own parties before the decorations were removed.

After leaving the governor's office, Mr. and Mrs. McLean and their children returned to Lumberton. Shortly, thereafter, they moved to Washington, D.C., where the former governor set up a law practice. The family traveled by train to Lumberton each weekend so that Mr. McLean could study the books of his other businesses. Partially because of that stressful schedule, his health deteriorated, and he died on June 21, 1935, of heart prob­lems. Margaret McLean and the children moved back to their home in Lumberton.

Margaret McLean, having lost contact with her mother in her youth, began visiting her in Greensboro and reestablished their relationship before her mother's death in 1939. Margaret McLean died on November 1, 1959, and was buried in Lumberton's Meadowbrook Cemetery. A contemporary newspaper article described her as having "a gentle and friendly simplicity which is the outward and visible sign of her genuine kindness."