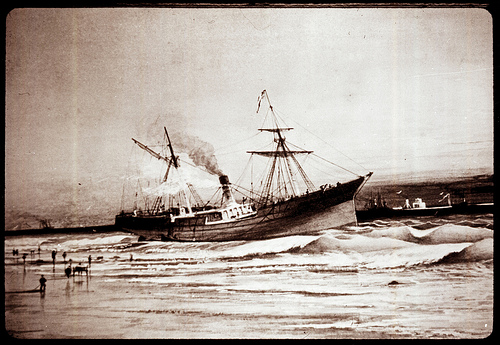 Modern Greece was a screw steam freighter used as a blockade-runner by Confederate forces during the Civil War. Weighing 753 tons and spanning 210 feet in length, the ship was originally built by Richardson's of Stockton, England, for use in the Hull-Baltic timber trade in 1859. The Modern Greece's movements and activities were kept secret until it mysteriously appeared near land approximately three miles north of Fort Fisher and New Inlet at 4:15 a.m. on 27 June 1862. This was only one day after an article appeared in the Wilmington Journal (26 June 1862) stating that "the steamer Modern Greece, fitted out at Hull, sailed from Falmouth 28th April ostensibly for Tampico." The Union blockader USS Cambridge fired on the Modern Greece, which sped parallel to shore to reach the protection of Fort Fisher's big guns. Under heavy fire, it ran hard aground about one-half mile north of the fort. There is some speculation that the heavily laden, deep-draft vessel may not have succeeded in entering New Inlet, whose channel depth was only 12 feet.

Once the Modern Greece was aground, the USS Cambridge and the USS Stars and Stripes shelled the ship, striking it several times before being driven back by cannon fire from Fort Fisher. Solid shot was fired from the fort into the Modern Greece to prevent Union forces from pulling it off and salvaging it and to prevent gunpowder thought to be on board from exploding. Confederates at Fort Fisher immediately began salvage efforts, which continued for some time. Intelligence reports from both Union and Confederate sources vary widely, but they indicate that at least four 12-pounder Whitworth rifled cannons were salvaged, along with 5,000 small arms, powder, whiskey, bales of clothing, and a large assortment of household goods.

The remains of the Modern Greece gradually settled on the ocean floor and were forgotten for 100 years. Divers discovered them after a storm uncovered the site in 1962. That find, early in the celebration of the Civil War Centennial, sparked renewed interest in the vessel, which prompted the state of North Carolina and the U.S. Navy to salvage more than 10,000 artifacts from the Modern Greece along with its anchors and capstans. These were preserved for study and display at a nearby museum/visitors center built at the Fort Fisher State Historic Site. Now protected by North Carolina shipwreck salvage laws, the wreck remains where the ship sank, about 300 yards offshore in about 25 feet of water near Fort Fisher.

Stephen R. Wise, Lifeline of the Confederacy: Blockade Running during the Civil War (1988).

Modern Greece, A copy of a painting that was in the Blockade Runner Museum at Carolina Beach, NC. This copy was made from a slide in the collection of the North Carolina Museum of History, North Carolina State Archives of North Carolina, call #:N_73_12_30.  Available from https://www.flickr.com/photos/north-carolina-state-archives/6967506881/ (accessed May 14, 2012).