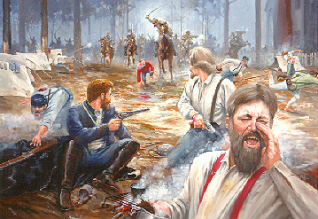 Monroe's Crossroads, west of Fayetteville and situated within the present Fort Bragg, was the site of one of the last battles of the Civil War, fought on 10 Mar. 1865. Lt. Gen. Wade Hampton led the Confederates and Brevet Maj. Gen. Judson Kilpatrick commanded the Union forces in the cavalry engagement. On 4 Mar. 1865 Maj. Gen. William T. Sherman's Union army entered North Carolina, headed for Goldsboro. Riding ahead of Sherman's infantry was the cavalry under the controversial Kilpatrick. Known as "Kill Cavalry" to his hard-driven men, Kilpatrick was a small, brave, cocky, and often unpredictable officer. General Hampton, at 46, was an aristocrat without formal military training, but by 1865 he had emerged as perhaps the finest cavalry commander in the Confederate army.

Having learned that Hampton was headed east toward Fayetteville, Kilpatrick decided to block his route. On the night of 9 March his men encamped at Monroe's Crossroads, squarely in Hampton's path. Kilpatrick himself occupied the deserted home of the Charles Monroe family and retired for the night. Meanwhile, Hampton and his officers rode out into the damp darkness to observe the Federal camp. They planned to attack at daylight. Throughout the night, the Confederates deployed and then waited quietly in a chilly rain.

At dawn on 10 March, the Confederates overran the Union camp, capturing cannons, freeing Confederate prisoners, and driving back the bewildered Federal horsemen. Kilpatrick was only half-dressed when a Confederate captain asked for his whereabouts. He obliged by pointing to a cavalryman fleeing on horseback. Kilpatrick thus escaped and began rallying his men, many of whom had fled to a swamp at the edge of their camp.

Meanwhile, the tide of the battle had turned against the Confederates. Most of the Federals had the presence of mind to grab their carbines or rifles before they fled. Their firepower exacted a heavy toll. The resurgent Union forces recaptured their cannons and turned them against the Confederates. By 8:00 a.m., the brief but bloody fight was over.

Kilpatrick claimed victory because his men had retaken their camp. He put his losses at 19 killed, 68 wounded, and 103 captured, but he was known for his fanciful battle reports, so these numbers are probably low. He also claimed to have found the bodies of 80 enemy soldiers. The Confederates, who reported capturing 500 Federals, claimed victory because they had accomplished their goal of clearing the road to Fayetteville.

At the Bennett Place near Durham Station, where Johnston surrendered to Sherman on 26 Apr. 1865, Kilpatrick and Hampton were both present. Hampton reminded the still-smarting Kilpatrick of his surprise attack one month earlier. Because of Kilpatrick's unceremonious flight into the swamp, Union foot soldiers dubbed the fight, "Kilpatrick's Shirt-tail Skedaddle."

"Dawn attack by Confederates at Monroe's Crossroads." Image courtesy of the National Park Service. Available from www.nps.gov/seac/mcattack.htm. Accessed (May 17, 2012).

An ancestor of mine (John R.

An ancestor of mine (John R. Madison, Co.B, 5th KY (Union) Cavalry, was captured here. His hat, shoes, etc, were taken by the rebels and he was forced to march to Richmond, VA, with only pieces of blankets wrapped around his feet in the snow, ice and mud. For more information please contact me.