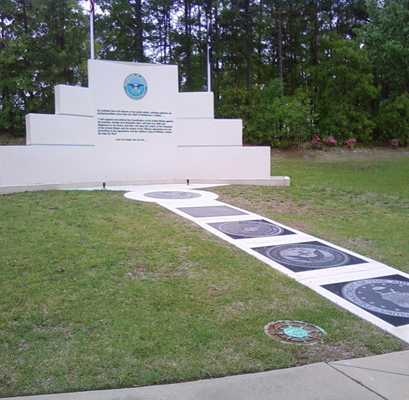 Description: This wall style memorial, dedicated to all enlisted personnel, is constructed of light granite in a stepped or modified pyramid design. A center tablet contains a color medallion of the seal of the U.S. Department of Defense and an inscription with the Oath of Enlistment below the medallion. This center stone is flanked on both sides by a stepped granite structure, forming the pyramidal shape. The walkway leading to the memorial is integrated into the memorial design, with four large square stones containing the seal of each of the branches of the armed forces leading to a single circular stone directly in the front of the memorial displaying the Great Seal of the United States.

Inscription:
As enlisted men and women of our great nation, nothing captures our / professionalism more than the Oath of Enlistment, it states. . . /


"I will support and defend the Constitution of the United States against / all enemies, foreign and domestic; that I will bear true faith and / allegiance to the same; and that I will obey the orders of the President / of the United States and the orders of the officers appointed over me, / according to the regulations and the Uniform Code of Military Justice. / So help me God." /

Location: The memorial sits on the west side of Reilly Road just to the north of the intersection with Explorer Street. It faces east.

Landscape: The memorial sits in a grassy, park-like area, in close proximity to other markers and memorials. The Monument to Lt. Harley Pope is located in the center of the sidewalk directly in front of the memorial, and the Pope Airmen Memorial is located just steps to the south along the sidewalk. Four retired aircraft are on display directly across the street, and a wooded area sits directly behind the memorial.