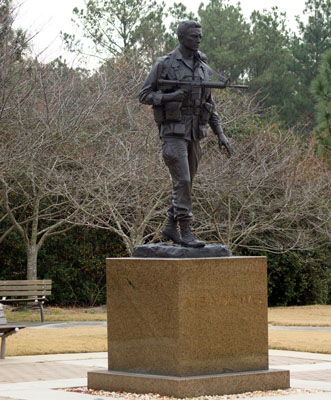 Major Richard "Dick" Meadows Statue
Fort Bragg
View complete article and references at Commemorative Landscapes of North Carolina at: https://docsouth.unc.edu/commland/monument/398
Description: The monument to Major Richard "Dick" Meadows stands larger than life, at approximately eight feet tall and weighing 900 pounds. Standing on a four and a half foot brown granite base, the bronze statue depicts the Special Operations commander in full combat attire carrying a Car-15 semi-automatic rifle. He stands firm and courageous, but cautious as he takes a small step. With his weapon at the ready in his right hand, his left hand is held at his side, palm open and moving slightly back to suggest to those he leads both danger and his ability to protect. The sculptor further represented Meadows without reference to unit or rank.
The front face of the pedestal is inscribed simply with the soldier's surname in gold inlay. The parade field where the monument is installed was dedicated at the same time as the Meadows Memorial Parade Field with a bronze plaque. The plaque sits several feet away from the statue and is inscribed with a history of Meadows' service and the honors he received.
Image of plaque
Inscription:
Pedestal: MEADOWS
Plaque: MEADOWS MEMORIAL PARADE FIELD / IN MEMORY OF / MAJOR RICHARD J. MEADOWS / 16 JUNE 1931 - 29 JULY 1995 / DURING HIS LONG AND ILLUSTRIOUS CAREER, MAJOR MEADOWS EMBODIED ALL OF / THOSE QUALITIES THAT MARK THE UNIQUE INDIVIDUALS SERVING IN SPECIAL / OPERATIONS FORCES. MAJOR MEADOWS' EXTRAORDINARY ACHIEVEMENTS / THROUGHOUT HIS DEDICATED SERVICE WITH ARMY SPECIAL FORCES AND RANGER UNITS / CONTRIBUTED TO OUR NATION'S SECURITY FOR NEARLY FOUR DECADES. HIS SERVICE INCLUDED: COMBAT ACTION IN THE KOREAN WAR, CLANDESTINE OPERATIONS IN LAOS, / EXCHANGE DUTY AND TROOP COMMAND WITH THE BRITISH 22ND SPECIAL AIR SERVICE / EXTENSIVE OPERATIONS BEHIND ENEMY LINES DURING THE VIETNAM WAR, GROUND / ASSAULT COMMANDER DURING THE SON TAY RAID, RANGER TRAINING INSTRUCTOR, / COVERT OPERATOR IN SUPPORT OF OPERATION EAGLE CLAW IN IRAN, AND AS A KEY / MEMBER OF ELITE SPECIAL MISSION UNITS. FEW SOLDIERS HAVE BEEN AS WILLING TO / PUT THEMSELVES IN HARM'S WAY FOR THEIR FELLOW COUNTRYMEN. MAJOR MEADOWS / REPEATEDLY ANSWERED OUR COUNTRY'S CALL AND ALWAYS TOOK ON THE MOST / SENSITIVE ASSIGNMENTS. FOR HIS EXCEPTIONAL SERVICE TO THE NATION, MAJOR / MEADOWS WAS AWARDED THE DISTINGUISHED SERVICE CROSS, SILVER STAR (1 OLC), / LEGION OF MERIT, BRONZE STAR FOR VALOR, MERITORIOUS SERVICE MEDAL, AIR MEDAL, / JOINT SERVICE COMMENDATION MEDAL, ARMY COMMENDATION MEDAL (2 OLC), AND / THE PRESIDENTIAL CITIZEN'S MEDAL FOR DISTINGUISHED SERVICE. / THIS STATUE AND ADJACENT PARADE FIELD WERE DEDICATED IN MAJOR MEADOWS' / MEMORY ON 6 JUNE 1997.
Dedication date: 6/6/1997
Creator: Lawrence M. Ludtke, Designer, Sculptor
Materials & Techniques: Bronze statue and plaque, granite pedestal
Sponsor: H. Ross Perot
Cost: $160000
Unveiling & Dedication: The statue was dedicated by H. Ross Perot, and the dedication was attended by Meadows' family, including his wife Pam Meadows, and many of his former colleagues including General Wayne A. Downing, former commander of U.S. Special Operations Command, and General Hugh Shelton then Commander in Chief of the Special Operations Command. The sculptor, Lawrence M. Ludtke was also in attendance. H. Ross Perot and Lt. General Peter Schoomaker delivered remarks at the dedication. In his speech, Perot referred to Meadows as "a James Bond in real life."
Subject notes: Major Richard "Dick" Meadows was a U.S. Army Special Forces soldier, combat leader, and intelligence operator involved in conflicts from the Korean War through the Vietnam Conflict. He was born into poverty in Virginia in 1931 and enlisted in the army at the age of 15 or 16 in 1947, attaining the rank of master sergeant by age 20. He joined the Special Forces in 1953 and remained with the unit for the rest of his military career until he retired in 1977. He also served in an exchange program with the British Special Air Service early in his career and was awarded the SAS Wings for his service there. He was involved in key planning operations in Vietnam and served as a team leader during the unsuccessful Son Tay Raid to rescue U.S. prisoners of war in 1970. Meadows was also instrumental in the creation of the secretive military task force known as Delta Force in the 1970s.
He continued to serve as an advisor following his retirement, notably serving as an operative in Tehran during the Iran Hostage Crisis in 1980, and as a consultant to efforts to curtail illegal drug trafficking. In the 1980 rescue attempt in Tehran, Meadows went under cover in Tehran as an Irish businessman to provide information to the military rescue mission.
He was distinguished in both military and civilian service with numerous honors and awards including the Distinguished Service Cross, a Bronze Star Medal, and he was awarded the Presidential Citizen's Medal for Distinguished Service by then President Bill Clinton. Meadows died in 1995 at the age of 64 and is buried in Florida.
Perot originally meet Meadows when the Joint Chiefs of Staff requested that he visit and thank the soldiers involved in the Son Tay Raid in Vietnam.
Meadows' grandson posed in combat gear for the sculptor in order to provide authenticity to the depiction. Retired Command Sgt. Major Joseph Lupyak, who participated in the Son Tay raid with Meadows, remarked that the statue was an exact likeness. Every year the Dick Meadows Award, a statuette reproduction of the monument, is awarded to an outstanding special operations soldier.
Location: The statue is located in the southeast corner of the Meadows Memorial Parade Field, adjacent to the U.S. Army Special Operations Command headquarters on Yadkin Road in Fort Bragg. It faces generally west across the width of the parade field.
Landscape: The statue sits in small paved plaza area of the parade field, surrounded by lawn. That corner of the parade grounds is framed in the background by trees and plantings.
City: Fort Bragg
County: Cumberland
Subjects: Historic Civic Figures,Historic Military Figures,Korean War,Veterans of Multiple Wars,Vietnam War
Latitude:
35.10971
Longitude:
-79.0016
Subjects:
Monuments
Places
Authors:
Commemorative Landscapes of North Carolina
Origin - location:
Cumberland County
Fort Bragg
From:
Commemorative Landscapes of NC, University of North Carolina Chapel Hill.