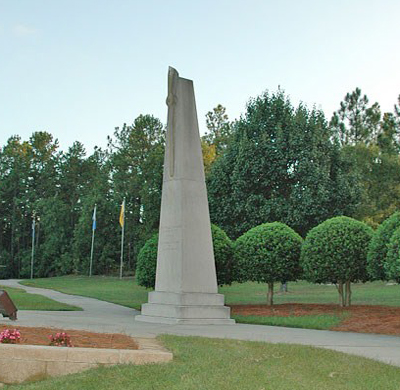 Description: This monument is a tall, slightly truncated concrete obelisk rising from a low 3 tier base with a single propeller mounted near the top. The front face bears an inscription.

Post dedication use: Pope Field and the memorial are now used as a public space for many military observances including Veterans' Day, Military Family Appreciation Day in May, Armed Forces Day, and Independence Day. Wreaths are laid at the Pope memorial to honor and remember fallen United States Soldiers.

Subject notes: Camp Bragg was established in 1918, and the following year Camp Bragg Flying Field opened. First Lieutenant Harley Halbert Pope was the first commanding officer assigned there. On Janaury 1, 1919, Pope and Sgt. Walter Fleming left Camp Jackson in Columbia, South Carolina for return to the landing field at Camp Bragg after mapping airmail routes. In the absence of modern instruments, they used the tracks of the Atlantic Coastline Railway along with rivers to navigate their route. Mechanical problems required them to stop at Newport News, Virginia for a week, resuming their flight on January 7. The plane never made it to Camp Bragg, instead crashing into Clarendon Bridge on the Cape Fear River just to the north of Fayetteville. Pope and Fleming were found in the river some months later. Lt. Pope was memorialized with the renaming of the field on April 5, 1919. A native of Bedford, Indiana, Pope's recovered body was subsequently returned to his family there, and the people of Bedford erected the monument in North Carolina to his memory.


Pope and Fleming were flight pioneers, with the opening of Camp Bragg Field only 15 years following the Wrights' flight at Kitty Hawk on December 17, 1903. The development of the air field at Camp Bragg was an important milestone in the advancement of U.S. power in the air following World War I.

Location: The monument is located on the west side of Reilly Road at the center of a series of monuments installed in a walkway several feet from the main sidewalk. The front faces roughly east.

Landscape: The monument sits in the center of a semi-circular paved area within a walkway connecting the surrounding monuments. The site is surrounded by grass and a wooded area, and an installation of historic aircraft sits immediately across Reilly Road.