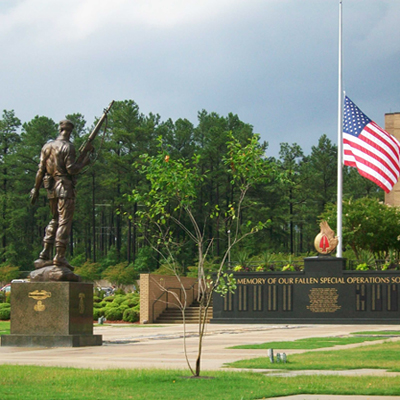 Description: A bronze sculpture of a Green Beret Special Forces non-commissioned officer from the Vietnam War stands from a height of 22 feet in the U.S. Army Special Operations Command's Memorial Plaza at Fort Bragg. He is alert and at the ready with his finger above the trigger of his M-16. His hand is extended, and his foot crushes a snake to represent the end of oppression. The statue itself is 12 feet of bronze, standing atop of a green granite pedestal. Inside the statue's base is a time capsule with a Spacial Forces uniform, a Green Beret, John F. Kennedy's speech to the Green Beret soldiers, and a bust of JFK. The platform that has an inscription. The statue faces an American flag and the USASOC Memorial Wall Marker, which has the names of soldiers killed in combat.

Inscription:
Welcome Kinsman, Comrade, Friend. / Recorded here on this humble Wall are the / names of our fallen Heroes. They were / and will always be cherished Soldiers of / Army Special Operations, our comrades in arms. / Know that they eagerly sought and accepted / our Nation's most difficult missions against / our most dangerous enemies. Know that / they willingly endured hardship and danger / and, at the end, sacrificed all for us. / With solemn pride, know that in doing so / they proved true to their oath to the Constitution and / duty to the Citizens of the United States of America. / To them, their example and their memory / we humbly dedicate this Memorial.

Post dedication use: The Memorial Plaza hosts celebrations and memorial ceremonies for Memorial day and other events.

neighbor of Donald DeLue, Leonardo N.J. I was one of the models for the Green Beret statue (Bronze Bruce ) I modeled for several other works for Donald. We were neighbors for over 30 years