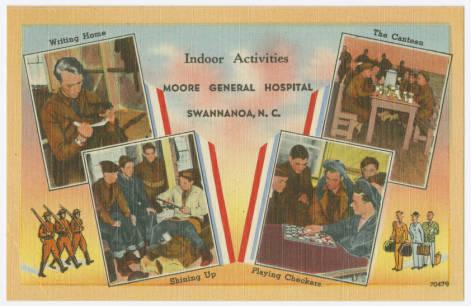 Moore General Hospital, located between Swannanoa and Black Mountain on U.S. 70, was built as a general army hospital for the treatment of sick and wounded soldiers during World War II. Named for Samuel Preston Moore, a native of Charleston, S.C., and surgeon general of the Confederacy, the hospital complex was designed to include numerous buildings, 1,520 beds, and a full-time staff of 1,500 people. Government engineers envisioned it as the "Walter Reed of the South." Supervised by a private firm from Asheville, construction of the hospital began in May 1942, and the first patients began arriving the following November. Col. Frank W. Wilson was the hospital's first commanding officer. In addition to the buildings for patients and staff, the site also included 36 structures to house men in training for service with the medical corps; the first training unit assigned there was the 28th General Hospital.

A rehabilitation center, which officially opened in June 1944, was added when the hospital took over the new Sand Hill High School building in West Asheville. In September 1944 the facility expanded to include a Tropical Disease Center capable of treating an additional 1,400 patients. In May 1945 German prisoners of war were brought in to provide maintenance and other labor services; they were housed in a separate camp on the north section of the hospital grounds.

In September 1946 the U.S. War Department declared Moore General Hospital a surplus facility, and it was taken over by the Veterans Administration. For several years it was known as the Swannanoa Rehabilitation Center, an annex of the Oteen Veterans Hospital, and served as a tuberculosis rehabilitation center. In 1960 the Veterans Administration consolidated its operation at a central location in Oteen, and the Moore General Hospital property was deeded to the state of North Carolina for use as a juvenile evaluation center.