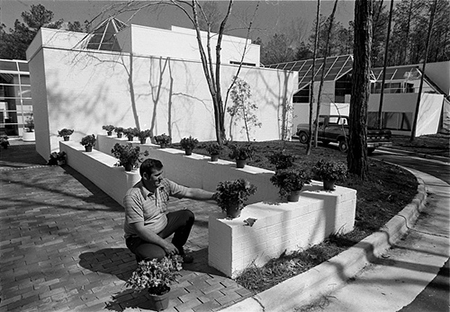 In September 1978, the National Humanities Center at Research Triangle Park admitted its first class of fellows. In keeping with its stated purpose-"to encourage scholarship in the humanities and to enhance the influence of the humanities in the United States"-the Humanities Center since that time has supported advanced study in history, languages and literature, philosophy, and other fields of the humanities. Each year, the Humanities Center selects about 40 fellows who are chosen in an open competition by a jury of scholars. Up to one-third of the fellowships go to scholars who are no more than ten years beyond receipt of their Ph.D. The center provides stipends, and each fellow has a study in which to write. The center also encourages the exchange of ideas at conversation over lunch or coffee, at conferences, and at interdisciplinary seminars, most of which have been conceived and organized by fellows. A library staff secures books for fellows from neighboring university libraries and other institutions and maintains a reference library. A 35-member board of trustees supervises the work of the National Humanities Center, which is carried on under the aegis of a director.

The National Humanities Center also produces a range of information. Ideas, a semiannual periodical, features essays by fellows; Soundings, the center's weekly radio interview program, is heard on more than 300 stations nationwide; and public lectures are given by fellows and visiting scholars. The center also sponsors summer institutes for faculty from 33 liberal arts colleges and for secondary school teachers from across the United States, and it has developed a pilot program for teachers at North Carolina high schools.

The idea for the National Humanities Center emerged from the experience of three distinguished humanists, Meyer Abrams of Cornell, Morton Bloomfield of Harvard, and Gregory Vlastos of Princeton, who were working together at the Center for Advanced Study in the Behavioral Sciences at Palo Alto during 1967-68. Impressed by the fruitful interchanges among scholars that took place at that institution, which largely catered to social scientists, they contemplated creating a similar center for humanists modeled on the one in California and on the Institute for Advanced Studies at Princeton. When the American Academy of Arts and Sciences approved the idea, a number of institutions aspired to become the site of the new center; but after considering 15 potential locations, the academy determined that the most attractive bid was from the Triangle Universities Center for Advanced Studies, Inc., a consortium of Duke University, the University of North Carolina at Chapel Hill, and North Carolina State University. This organization provided a valuable 15-acre site in Research Triangle Park and nearly $3 million for the construction of a building and toward the first five years of operation.

North Carolinians who played significant roles in launching the National Humanities Center included John Caldwell, William Friday, Dan Lacy, C. Hugh Holman, Vermont Royster, Terry Sanford, and, above all, Archie K. Davis. Davis, a Winston-Salem banker, made a major contribution in raising funds at the outset, within a month raising $1.5 million in pledges. In recognition of his role, the Humanities Center's building bears his name. Another North Carolinian, Claude McKinney, the dean of the College of Design at N.C. State, chaired the committee that supervised construction of the building, a much-admired edifice of white brick and glass designed by Hartman-Cox of Washington.