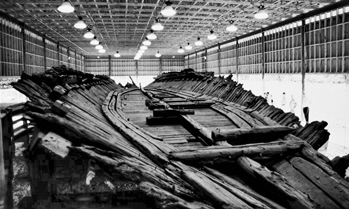 In October 1862 the Confederate navy commissioned the building of the ironclad gunboat CSS Neuse to strengthen southern defenses and prevent Union occupation of the sounds and rivers of North Carolina. One of 22 ironclad warships commissioned by the Confederacy, the Neuse was designed by naval contractor John L. Porter and built by Howard and Ellis, shipbuilders of New Bern. It was constructed near the town of Whitehall (now Seven Springs) on the Neuse River, for which it was named. A sister ship, the CSS Albemarle, was built simultaneously on the Roanoke River. The ironclad concept had been proven in the battle between the USS Monitor and CSS Virginia at Hampton Roads in the spring of 1862. Construction of these superior, armored floating batteries with a built-on ram was intended to reduce the advantage of the much larger U.S. Navy's fleet of warships.

On 22 Apr. 1864, in an attempt to navigate downstream and retake the town of New Bern from Union forces, the recently completed Neuse ran aground on a sandbar one-half mile below Kinston. It remained stuck there for almost a month. During this period, its support troops were transferred from Kinston to Virginia, preventing a second attempt to retake New Bern when the Neuse was finally freed. On 12 Mar. 1865, as the Confederacy was collapsing, Cdr. Joseph Price, on orders from Gen. Braxton Bragg, ordered his crew to shell advancing enemy cavalry and then burn the Neuse to prevent its capture. Before fire consumed the vessel, a loaded gun discharged and blew a hole in the Neuse, which sank rapidly. Shortly after the war, machinery and armor were salvaged from the Neuse. After settling on the river bottom, it lay undisturbed except for shifting sands and slight exposure during periods of low water until 1961.

Driven by curiosity and a rumor that a barrel of gold could be found on the old gunboat, three Kinston men began a salvage project that lasted until June 1963. By the time the Neuse was cut into three sections and transported five miles to Governor Caswell Park in Kinston, a great number of citizens, groups, clubs, and political leaders, including the governor of North Carolina, had contributed in some way to the recovery of the Neuse. Artifacts and hull remains are on display at the CSS Neuse State Historic Site and Governor Richard Caswell Memorial in Kinston.

2012 Update: On June 23, 2012, the CSS Neuse is moving to a new, climate controlled environment. More information is available at "CSS Neuse on the Move" (North Carolina Department of Cultural Resources.)