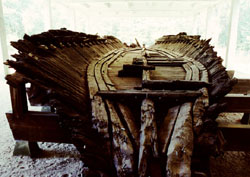 The CSS Neuse State Historic Site and Governor Richard Caswell Memorial, located on U.S. Business 70 in Kinston, is administered as a single 46-acre tract, although it commemorates two unrelated historical events from different centuries. One features the hulk of the CSS Neuse, a Civil War gunboat constructed by the Confederacy in 1865 in a vain effort to recapture New Bern from Union forces. The ironclad gunboat, built alongside the Neuse River, failed in its objective because it was too large, the river was too shallow at the time, and the enemy threatened to capture it. Scuttled by its builders, the Neuse sank to the bottom of the river, from which it was recovered in 1963. Now located beside the river and protected by an overhead shelter, the keel is preserved as an interesting relic. Adjacent at this historic site is a visitors center with informative displays and artifacts from the boat.

Nearby is the other featured portion of this site: the family cemetery in which Governor Richard Caswell (1729-89) is buried. In a separate building there are exhibits on Caswell as a colonial official, a Revolutionary War officer, and the first governor of North Carolina as an independent state.

"Hull Remnant of the CSS Neuse." Courtesy of NC Historic Sites. Available from http://www.nchistoricsites.org/neuse/main.htm (accessed May 18, 2012).