The term “normal school” was derived from the French term école normale, which means “standard” or “model school.” One of the first normal schools established was in Paris in 1794. Normal schools were established to train teachers in the “norms,” or standards, of education.

Normal schools in the United States were initially one- or two-year schools and prepared attendees to teach elementary school.  Secondary school teacher training was generally taught in a college or university setting. Normal schools became “teachers colleges,” and by the 1950s, all levels of teacher education were available through an education department in a college or university setting.

In North Carolina, Zion-Parnassus is thought to be the first distinct normal school. It was established in 1785 by Rev. Samuel Eusebius MCorkle at Thyatira, on the road between Salisbury and Statesville. Normal schools continued to operate in North Carolina after that time, and the Constitution of North Carolina of 1868 made provisions for the establishment of a Department of Normal Instruction in connection with the University of North Carolina. 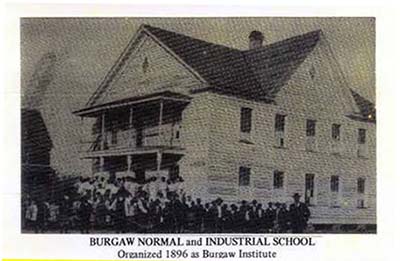 In 1877, the North Carolina Legislature ratified “An Act to establish Normal Schools” making it “lawful for the State Board of Education to establish a normal school, in connection with the University, for the purpose of teaching and training young men of the white race to be teachers of common schools of the state.” Although the act established this training for men only, the State Board decided that admission would be open to women as well. This inclusion marked the beginning of coeducation at Chapel Hill.

Fayetteville State University, founded in 1867, was North Carolina's first historically black college to be recognized as a normal school. The institution was established as Howard School in honor of General Olivier Otis Howard, the first commissioner of the Freedmen’s Bureau. In 1877, the North Carolina General Assembly chose Howard School as a teacher training institute for African Americans, and its name changed to State Colored Normal School.

Thanks for answering the

Thanks for answering the question of why the term "normal" was applied to teachers' colleges. I went to a former "normal school," now known as Kutztown University of Pennsylvania. Many other sites discuss the history of normal schools, without directly answering my query. You folks take care of it in the lead graph. That's a way-better-than-normal performance.