The North Carolina Sports Hall of Fame (NCSHF), which honors 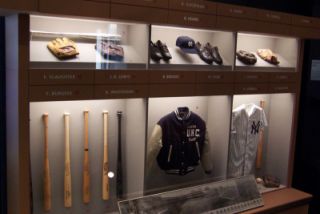 coaches, administrators, journalists, and other sports-related professionals in addition to athletes, was established in 1963 through the efforts of Jack Wood, a Charlotte merchant, and Lloyd Caudle, a Charlotte attorney, with support of the Charlotte Chamber of Commerce. The first five inductees were runner Jim Beatty, baseball pitcher Wes Ferrell, football players Charlie Justice and Ace Parker, and golfer Estelle Lawson Page. Each was officially inducted into the NCSHF at a banquet in Charlotte in December 1963.

All subsequent NCSHF members have been elected annually and required to attend an induction banquet, where they provide the Hall of Fame with mementos of their career, including uniforms worn and equipment used. In 1969 the Charlotte Coliseum agreed to display the mementos in trophy cases in the corridors of the building. The memorabilia was later transferred to the North Carolina Museum of History in Raleigh, where it has become a permanent exhibit. In April 1994 the NCSHF moved into a new 4,000-foot wing of the museum.

Baseball area in the NC Sports Hall of Fame Exhibit at the NC Museum of History. Available from https://www.ncshof.org/museum-tour/ (accessed August 27, 2012).

Please provide me with all

Please provide me with all names of swimmers inducted in the N.C. Sports Hall of fame. Thanks

Thank you for visiting NCpedia. I recommend contacting the NC Sports Hall of Fame (https://www.ncshof.org/contactus) for more information on NC Hall of Fame inductees.

Is it possible that you can

Is it possible that you can provide me with all the names of swimmers and swim coaches that have been inducted into the N.C. Sports Hall of Fame?
Thank you.
I can find no such breakdown on line. Sherwood