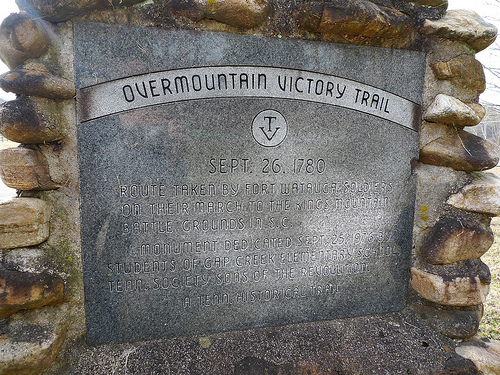 The Overmountain Victory National Historic Trail runs from Abingdon, Va., to the Kings Mountain National Military Park in South Carolina, crossing parts of Tennessee and North Carolina. A separate branch stretches from Elkin to Morganton in North Carolina, where it joins the main trail. The trail commemorates the route used by Patriot forces that marched across the mountains and defeated an army of Loyalists under Maj. Patrick Ferguson at the Battle of King's Mountain on 7 Oct. 1780. There are three different routes in the Overmountain Victory National Historic Trail: a motor route along public highways; the original, often inaccessible route of the Patriot army; and the route utilized in modern times by the Overmountain Victory Trail Association in their annual reenactment of the historic march.

The idea for the reestablishment of the trail began in 1975, when a group of reenactors and grassroots activists, with the help of the Appalachian Consortium, organized the first march over the old route. The next year Harry Smith of Abingdon led a group along the entire route. In 1977 the effort gained momentum, thanks to the work of Lenoir residents Bill Stronach, director of the Lenoir Parks and Recreation Department, and Congressman James T. Broyhill of North Carolina. The latter pushed legislation through Congress for a feasibility study of the route's designation as part of the National Trails System. In September 1980 the route was designated a National Historic Trail.