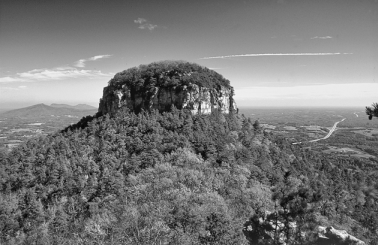 Pilot Mountain, located in southeastern Surry County, is one of North Carolina's most recognizable geologic features. Rising more than 1,400 feet above the surrounding landscape, it consists of Big Pinnacle, a white quartzite monadnock with sheer rock walls and a rounded, vegetation-covered top, and Little Pinnacle, a lower section that is comprised of metamorphic rock not usually found in the region. Geologists believe that the 200-foot-high Big Pinnacle was formed by the compression of sand from a beach that existed in western North Carolina approximately 1 billion years ago. The sand was first compressed into sandstone and later became quartzite through heat and pressure. The metamorphic rock of the mountain's base is believed to have developed from a deep marine environment.

The mountain's unmistakable shape, visible from great distances, has been a guidepost for travelers for centuries. The Saponi and Tutelo Indians who lived in the area called the peak Jomeokee, the "great guide" or "pilot." The Great Wagon Road, which brought settlers into the Piedmont from the Northeast, skirted the base of Pilot Mountain. Catching a glimpse of the solitary mountain was a boost to the spirit of the people who were embarking on new lives in the Carolinas. An entry in the diaries of Moravian settlers in 1753, 37 days into their journey from Pennsylvania, suggests the joy that settlers found in spotting the peak: we "saw the Pilot Mountain, and rejoiced to think that we would soon see the boundary of Carolina, and set foot in our own dear land." In 1968, primarily through the efforts of local citizens, Pilot Mountain became North Carolina's fourteenth state park.

Adelaide L. Fries, Stuart Thurman Wright, and J. Edwin Hendricks, Forsyth: The History of a County on the March (1976).