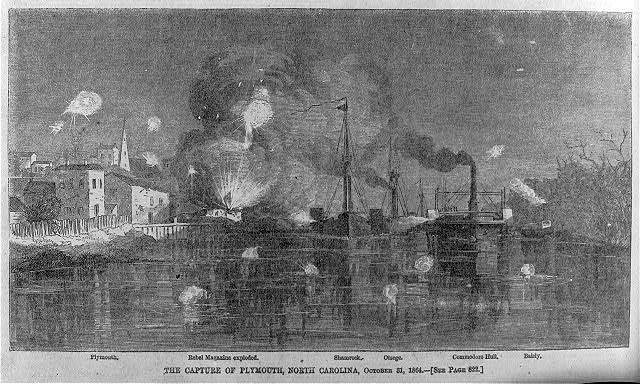 The Battle of Plymouth, the most effective Confederate combined-arms operation of the Civil War, was waged in April 1864. Two years earlier, in May 1862, Union forces had occupied Plymouth, near the mouth of the Roanoke River. From their bases in Plymouth, Washington, N.C., and New Bern, the Federals conducted frequent raids in eastern North Carolina. Meanwhile, by the spring of 1862, two Confederate ironclads under construction at Edward's Ferry on the Roanoke River and at Kinston on the Neuse River were nearing completion. The assistance of these vessels, the Albemarle and the Neuse, was essential to the success of any attempt to recapture the coastal towns. Brig. Gen. Robert F. Hoke, acting with Cdr. James Cooke of the Albemarle, concentrated first on Plymouth.

By late afternoon on 17 Apr. 1864, three brigades of infantry-about 10,000 troops-commanded by Hoke was within five miles of Plymouth. Defending the town was a Union garrison of 2,834 men. Although badly outnumbered, the Federals had strongly fortified the post and repulsed the first Confederate attacks. But the next day, 18 April, saw heavy shelling, with Union vessels in the river sunk or damaged and forced to retreat to Plymouth. Meanwhile, U.S. Navy gunboats provided artillery support against the Confederates, but their success was short-lived.

During the night the Albemarle, taking advantage of an abnormally high river level, safely passed over the obstructions and slipped undamaged past Fort Gray, west of Plymouth. In the predawn hours of 19 April, Cooke's ship encountered the USS Southfield and USS Miami, the most powerful Union vessels on the Roanoke. The Albemarle promptly sank the first and heavily damaged the second, forcing the Miami and two other gunboats to retreat. Late that afternoon, Hoke launched a double envelopment attack against both the east and west sides of the town. The Albemarle, having returned to Plymouth, furnished supporting fire on the east side of town.

On 20 April Hoke renewed the attack on each flank, capturing forts from both directions. But the Union commander, Brig. Gen. Henry Wessels, refused to surrender and gathered the remainder of his forces inside Fort Williams, the Federals' last remaining stronghold, near the center of Plymouth. Hoke unleashed his artillery on the bastion, and the Albemarle added its two large rifled cannons to the bombardment. Heavily shelled from all sides, Wessels unconditionally surrendered his entire command. In addition to the Union garrison, Hoke captured 25 artillery pieces, at a cost of only 50 Confederates killed and wounded. His victory provided a badly needed morale boost for the Confederacy.

Following the fall of Plymouth, Federal forces abandoned Washington, N.C., as well. The Confederates held the town until the Albemarle was sunk by Union raiders in late October 1864. With the ironclad gone, the southern troops abandoned Plymouth, which remained in Federal hands for the duration of the war.