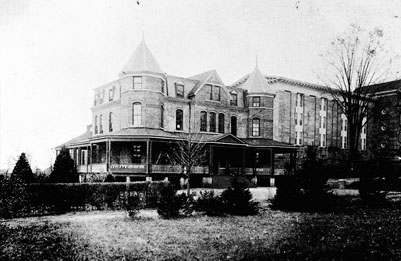 By the early 2000s the North Carolina Division of Mental Health, Disabilities, and Substance Abuse Services operated four psychiatric hospitals for care of the mentally ill, each serving a specific region of the state. Dorothea Dix Hospital, in Raleigh, the state's oldest psychiatric institution, served residents of North Carolina's south-central region; John Umstead Hospital, in Butner, the north-central region; Cherry Hospital, in Goldsboro, the eastern region; and Broughton Hospital, in Morganton, the western region. Before these hospitals appeared beginning in the mid-1800s, North Carolinians suffering from many forms of mental illness were kept at home, sent to private out-of-state facilities, or held in local jails. Many people had a superstitious fear of the insane, and although the state authorized the courts to appoint guardians who would protect the property of the mentally ill, their care remained the responsibility of individual families.

In the nineteenth century, state psychiatric hospitals offered little more than beds and food for the mentally ill, alcoholics, and the mentally retarded. In 1909 former asylum patient Clifford Beers (1876-1943) established the National Committee for Mental Hygiene (now the National Association for Mental Health) as part of his crusade to improve the care of people with mental illness. The North Carolina branch of the foundation was formed in 1914, and the advent of modern mental health care in North Carolina can be traced from this date. After state legislators changed commitment law in 1973 to permit the involuntary hospitalization of people imminently dangerous to themselves or others, psychiatric hospitals began to treat more involuntary patients with a history of violence. 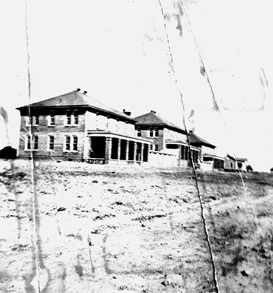 Although the General Assembly considered building an asylum for the mentally ill in 1825, 1838-39, and 1844, it was only when nurse and social reformer Dorothea Lynde Dix (1802-87) addressed the lawmakers in 1848 that funding for a hospital was set aside. By 1851 a tract of 182 acres just west of Raleigh had been acquired, and planning for the Dix facility was begun. State appropriations and several bonds funded construction of the first building, a Romanesque structure with a large central section and two wings designed by prominent New York architect Alexander T. Davis. A second building, containing a kitchen, bakery, and apartments for staff, was soon added. This was the first public building in Raleigh to have steam heat and gas lighting. Dorothea Dix refused to have the hospital named after her but agreed to the designation of the site on which it was located as "Dix Hill," in memory of her physician grandfather, Elijah Dix.

The hospital began admitting patients in 1856. Over the years, its mental heath services expanded and additional buildings were constructed. In 1902 the Dorothea Dix School of Nursing was established. By the mid-twentieth century, the hospital occupied 1,248 acres, much of them left as forest. In 1959 the name of the facility was changed to Dorothea Dix Hospital, in memory of the woman who had been essential to its founding.

By 1974 the Dix complex had grown to 282 buildings on 2,354 acres, plus 1,300 acres of farmland; patient capacity was 2,756. Over the next several decades, however, demand for long-term hospitalization of the mentally ill declined as out-patient care was emphasized. In addition, other state hospitals and private institutions offered mental health services that were closer and more convenient for many citizens. By the early 2000s, Dix Hospital had 120 buildings and occupied a 425-acre tract, accommodating a maximum of 682 patients. The hospital's approximately $60 million annual budget was supported by state and federal funds as well as patient fees.

By 1875 it was recognized that mentally ill citizens in western North Carolina were underserved, and in March of that year the General Assembly provided funds to build a second state hospital, the Western North Carolina Insane Asylum, in Morganton. Patients began to be admitted in 1883, with about 100 individuals transported by railroad from the overcrowded Raleigh facility. The hospital grew, with many buildings added through the late nineteenth and early twentieth centuries, and various new therapies became available to patients. The name of the hospital, which had been changed in 1890 to the State Hospital at Morganton, officially became Broughton Hospital in 1959 in honor of Governor J. Melville Broughton. In the early 2000s the facility served about 3,600 patients.

In 1877 the General Assembly appointed a committee to recommend the selection of a site for a facility that would serve African American mentally ill citizens statewide. On 11 Apr. 1878, 171 acres were purchased two miles west of Goldsboro. On 1 Aug. 1880 the first patient was admitted to the new Asylum for Colored Insane; in 1959 the name was changed to Cherry Hospital in honor of Governor Gregg Cherry. Cherry Hospital was the only facility in the state for mentally ill blacks until 1965, when the hospital was desegregated following the 1964 Civil Rights Act. As of the early 2000s Cherry Hospital cared for hundreds of patients from 33 counties in eastern North Carolina.

John Umstead Hospital, built on the site of an old prisoner-of-war compound, began admitting patients in 1947. Its mission has been to treat mentally ill persons efficiently and successfully and help them return to their homes and communities. By the early 2000s Umstead Hospital maintained a research and educational program to promote knowledge of mental health issues.

In the 1960s and 1970s North Carolina used federal funds to open a number of community mental health clinics to relieve the overcrowded state psychiatric hospitals. Part of the national "deinstitutionalization" trend, the state's goal became treating the majority of patients within their communities rather than in long-term institutions. By the late 1980s, however, it had become clear that many local facilities were either inadequate or nonexistent, funding was unevenly distributed, and several areas relied on rest homes for the elderly to absorb the deinstitutionalized population. As a result of these trends, a reevaluation and downsizing of the state mental health programs was undertaken. The populations of the four state psychiatric hospitals decreased from approximately 10,000 in 1964 to 2,700 by 1989. As patient populations continued to shrink at state hospitals, physicians began to offer more sophisticated treatments. By 2006, in addition to the state psychiatric hospitals, several area programs provided a variety of services for North Carolinians with mental illness. These services included assessment, diagnosis, and treatment plans, individual and group therapy, help with financial or housing problems, daytime social or employment programs, and crisis intervention. Dorothea Dix Hospital, once the cornerstone of psychiatric care in the state, was scheduled to be closed in 2007.

It's interesting to see how

It's interesting to see how the idea of mental health has grown and in turn, so have the psychiatric hospitals. Hospitals like Dorothea Dix paved the way for newer mental health centers such as HopeWay in Charlotte.