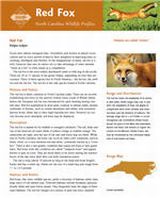 The red fox eats a variety of prey, but mice, voles and rabbits form the bulk of its diet. It will eat insects, birds, eggs, fruits and berries in spring, summer and fall. It may also scavenge on carrion and garbage.

Females are called vixens. Both males and females are sexually mature in 10 months. Red foxes mate generally in January in North Carolina, and are considered monogamous. Gestation is about 52 days.

Called pups. Red foxes have one litter per year in late February through April, with an average of five pups. Pups are born in a den that the parents dig or was dug by woodchucks or skunks. Males bring food to the female until the pups can be left alone. When she can leave them, the female nurses the pups during the day and hunts at night. Pups are weaned at 8–10 weeks and learn to hunt at 3 months. As they grow older, they explore farther from the den, and disperse to establish their own home range in September or October. The family remains together until the pups disperse.

About 5 years, although due to many mortality factors, most do not live that long. 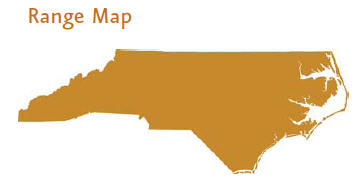 The red fox marks the boundaries of its territory with urine. Home ranges vary in size, depending on food abundance, competition with other animals, and the diversity of habitats. The average range is 2 to 8 miles. The red fox occurs throughout the continental United States except for parts of the West and Southwest.

Foxes have always intrigued man. Storytellers and writers in almost every culture throughout history have depicted foxes as cunning, intelligent and shrewd. The red fox is the most widely distributed canid in the world, and is one of two fox species found in North Carolina (the other is the gray fox). 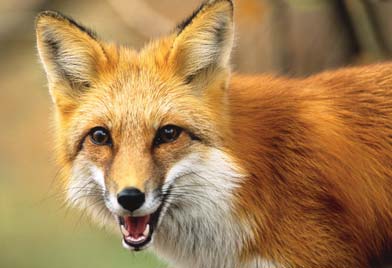 The red fox is fairly common in North Carolina today. There are no records of red foxes in the eastern United States south of Rhode Island before the Europeans introduced them for hunting during colonial days. Red fox populations have remained stable in many areas despite sustained harvest levels and outbreaks of disease such as canine distemper and rabies. This is likely due to their high reproductive rates. However, as Coyotes become more abundant, red foxes may be displaced or killed

The red fox is named for its reddish-orange coloration on its tail, body and top of the head. The undersides are light, and the tips of the ears and lower legs are black, like stockings. The tail is long (about 70 percent of the length of the head and body), bushy, and white-tipped. Adults are the size of a small dog, weighing 8 to 15 pounds. Though both red foxes and gray foxes may be reddish in color, gray foxes have a black-tipped tail and a streak of dark fur extending down their back.

While rare in North Carolina, red foxes can occur in other color variations, such as black, silver, or a cross between red and silver (“cross fox”). There is also a rare genetic condition that causes red foxes to lack guard hairs; these “Sampson foxes” appear brown or grey in color

Red foxes prefer a diversity of habitats, including farmland, pastures, brushy fields and open forest stands. They frequently hunt on edges of these open habitats. Most red fox activity occurs at night, but daytime movements are not uncommon.

The red fox is economically important as a predator and furbearer. Its appetite for mice and woodchucks greatly benefits farmers, and its pelt is valuable for making coats, hats, and other warm clothing.

Foxes are shy and non-aggressive animals. Red foxes are primarily nocturnal, but it is not unusual to see one during the day. Daytime sightings are not necessarily a sign that a fox is diseased. Rather, they are responding to the abundance of food available during the day.

The presence of red foxes in neighborhoods is not unusual. As with other wildlife, red foxes are adapting to changes in habitat. Residential areas can provide food sources and hiding/denning cover (i.e. ornamental shrubs, crawl spaces). Red foxes will take advantage of a wide spectrum of food (fruit, vegetation, pet food, garbage, small prey) often found in neighborhoods.

Red foxes can become habituated to humans if easy access to food exists. To avoid conflicts, people should keep neighborhoods clean of garbage, pet food, and bird food. Leaving pet food outside may attract red foxes, as well as coyotes, raccoons, opossums and skunks. Not only will this cause them to become habituated, but the high concentration of wild animals may result in outbreaks of fatal diseases such as rabies or canine distemper 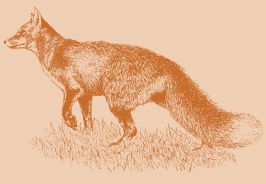 The NC Wildlife Resources Commission is currently working with University of North Carolina – Wilmington to monitor trends in gray and red fox populations in the Coastal Plain region. While remote cameras can be useful in documenting wildlife, some wildlife species avoid cameras, and camera placement must be done in a standardized and systematic way to answer specific research questions.

Produced by the Division of Conservation Education.