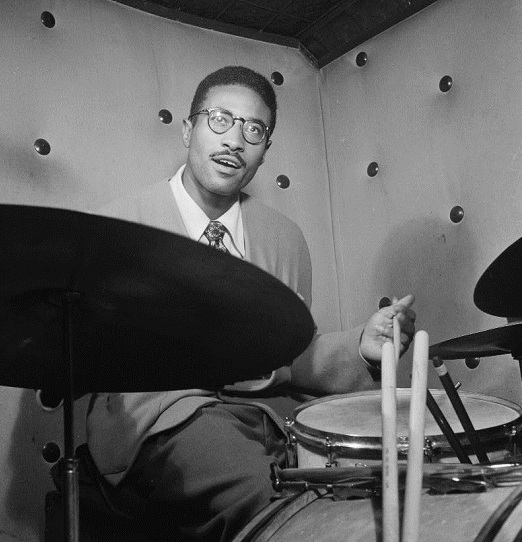 Maxwell Lemuel Roach was easily one of the most influential jazz drummers of the twentieth century. He was an innovative bandleader who participated in ensembles which pioneered both bebop and cool jazz. Born January 10, 1924, in Newland, N.C., in Pasquotank County near the Dismal Swamp, he moved to New York City with his family at the age of four. Early piano lessons with his aunt developed his musical talent, and by the time he was twelve had acquired his first drum set. Throughout high school, he played drums in a variety of jazz bands. By December 1943 he was filling in for the drummer in Coleman Hawkins’s band. In 1944, he cut his first record with Dizzy Gillespie, as part of Coleman Hawkins’ band. Other early gigs included backing Benny Carter, Sarah Vaughan, and Stan Getz.

During the late 1940s and early 1950s, Roach worked with many of the hottest players of the new style called bebop: Dexter Gordon, Bud Powell, Fats Navarro, Al Haig, Thelonious Monk, and others. Yet his work with Charlie Parker and Gillespie is certainly the most famous collaboration of his early career, spanning, with interruptions, 1945 to 1953. In his early work, Roach’s playing was notable for freeing the bass drum from keeping strict time—rather, he used the ride cymbal to set the pulse and used the rest of his drum kit to provide rhythmic counterpoint. His sudden "bombs" and skillful, thematically-driven improvisation on the drums were hallmarks of his style.

Roach was not only associated with bebop. He performed with Miles Davis on the groundbreaking album Birth of the Cool (1950), which was a landmark for the emergence of cool jazz. He also attended the Manhattan School of Music from 1950–53, earning a degree in music theory and composition. Roach also worked closely with bass player and composer Charles Mingus, collaborating on numerous records throughout the 1950s. Together the two men founded Debut Records, which stayed in business from 1952 to 1957;, and a counter-festival in opposition to the Newport Jazz

Festival. Further, Roach emerged as a bandleader; he formed a hard bop quintet featuring Clifford Brown on the trumpet, which lasted until Brown’s untimely death in a car accident in 1956. While he continued to play sessions with other bands, much of his creative energy for the rest of his life would be focused on his own bands. In 1962, he married the singer Abbey Lincoln; their marriage lasted eight years during which they produced music together. Roach also wrote music supporting the Civil Rights movement: the Freedom Now Suite (1960) is the most well-known example.

Later efforts included M’Boom Re: Percussion, a percussion ensemble Roach founded in 1970; a duet album with Cecil Taylor (1979); and two avant-garde albums (1978 and 1979) with Anthony Braxton. From 1971, he taught percussion at the University of Massachusetts, Amherst. Roach also became interested in theater pieces: he won the Obie Award for 1984–85 for his Shepardsets (his production of plays by Sam Shepard).

In 1984, Max Roach received the title of Jazz Master from the National Endowment for the Arts. In August 1988, he received a MacArthur Genius Grant, and the following year recorded a duet album with Dizzy Gillespie, their first collaboration in many years. Other striking achievements of his late career were his recordings for drums and string quartet (Survivors, 1984), a double quartet album (To the Max, 1991), his recording with a symphony orchestra (Max Roach with the New Orchestra of Boston and the So What Brass Quintet, 1995), and an album with the Beijing Trio (1999). In 1989 he was awarded the title of Commandeur of the French Ordre des Arts et des Lettres (Order of Arts and Letters). Two of his recordings have been inducted into the Grammy Awards Hall of Fame (1995 and 1999). In 2001, he received an honorary doctor of music degree from Columbia University. Max Roach died in his sleep on August 16, 2007 in New York City. In 2009, he was inducted into the North Carolina Music Hall of Fame.