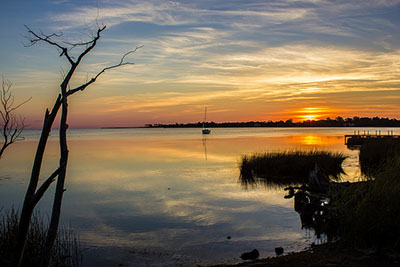 A sound is a long, wide body of water that connects two other bodies of water. They are typically protected from wind and waves by an island or reef, creating sheltered wetlands. North Carolina claims nearly 5,000 miles of inner waters and has more sounds than any other eastern state.

The Albemarle sound is the largest majorly brackish or freshwater sound in North America. It was a mostly saltwater sound until 1830, when a storm closed the Currituck inlet and limited the flow of ocean water into the sound. The sound is 60 miles long and up to 15 miles across, for a total area of 450 square miles. It is made up of water from the Roanoke, Chowan, and Pasquotank rivers, as well as several other small streams. It is protected from wind and tides by the outer banks to the east. The sound releases its water into the Pamlico sound through its southern end.

Portions of the Albemarle sound have been given individual names to differentiate them from the rest of the larger body of water. These include the Croatan sound, lying between Dare County and Roanoke Island, the Roanoke Sound, or the inlet between Roanoke Island and the Outer Banks, and the Currituck Sound, extending south from the Virginia state line along Currituck County.

The Back Sound is a small saltwater sound connecting Core and Bogue Sounds. It is 8.5 miles long and up to 2 miles wide. It is shallow and calm, and is protected from wind and currents by the Shackleford Banks to the south. It is part of the Intracoastal waterway.

Bogue Sound is a body of water running along the crystal coast from the Back Sound to the western Bogue inlet. It is 25 miles long and up to 3 miles wide. It contains shallow and calm water with slow moving currents. It is bordered by the barrier islands to the south and the North Carolina mainland to the north. Its close proximity to many major North Carolina beaches makes it very popular with vacationers.

The Core sound lies between the Carteret County mainland and the Cape Lookout National Seashore. It connects Pamlico Sound in the north to Back Sound in the Southwest.

The Pamlico Sound is the largest sound on the east coast. It is 80 miles long and up to 30 miles wide. It is very shallow, with an average depth of only 5 to 6 feet. Freshwater enters the sound from the Tar-Pamlico and Neuse rivers in the west, as well as from the Albemarle Sound to the North. Ocean saltwater enters the sound through the Ocracoke and Hatteras inlets to the west. The Sound extends southward from Roanoke Island on the Albemarle Sound border all the way to Cedar Island and the Core Sound.

Sunset on the Albemarle. Photo by Flickr user Nathan Adams.