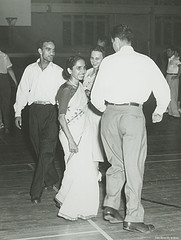 Square dancing in North Carolina is inseparably linked to the history and culture of the state's Mountain region. The earliest square dances featured several couples keeping dance figures square through the entire set, but North Carolina's Appalachian style of square dancing is characterized by couples breaking from a ring to perform the Wagon Wheel, Four Leaf Clover, Cage the Birdie, Shoo-Fly-Shoo, and other dances before returning to the ring formation. Square dancing has been defined by the use of a caller, a tradition that developed about 1812. The caller made it unnecessary to memorize the dance beforehand. Appalachian dance music has traditionally included fiddle and banjo and a repertoire of old-time string band and folk tunes, but square dancers, particularly the precision-step cloggers, often perform to Nashville-style country, with drums, electric bass and guitar, and steel guitar sometimes substituting for the fiddle. Appalachian dance has also absorbed the stylish dress and more choreographed routines of the Western or "cowboy" square dances.

Square dances were originally performed in homes to celebrate holidays and community events such as corn shuckings, barn raisings, and barbecues. The calls and pace of the dances often differed according to region. Communities and valleys often had their own versions of fiddle tunes, and dance steps also varied.

North Carolina has produced its own square dancing stars that helped put the dance into the international arena and define its modern characteristics. Bascom Lamar Lunsford, the "Minstrel of the Appalachians," was born in Mars Hill in 1882 and became one of the foremost promoters of folk festivals. His influential Mountain Dance and Folk Festival in Asheville was first held in 1928 and has attracted thousands of visitors every year. Sam Queen of Haywood County set square dance standards until his death in 1969 at age 80. He developed a rapid double shuffle clogging step that became popular in mountain dance groups. Lunsford and Queen helped organize the National Folk Festival in St. Louis in 1934.

Local square dance groups abound in North Carolina, and clogging has become a popular form of entertainment, particularly in tourist areas of the Mountains. The town of Waynesville, for example, closes its Main Street on Friday nights in the summer to allow dancing in front of the county courthouse, where bleachers are provided for spectators.

Susan Eike Spalding and Jane Harris Woodside, eds., Communities in Motion: Dance, Community, and Tradition in America's Southeast and Beyond (1995).

NC Federation for Folk, Round, and Square Dancing: http://www.ncfederation.org/