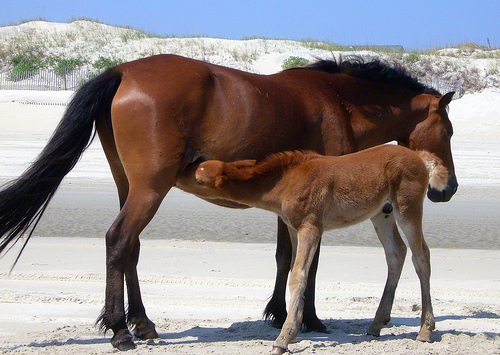 The request to designate the Colonial Spanish Mustang as the Official State Horse was submitted by numerous students from Shawboro Elementary School in Currituck County in conjunction with the Corolla Wild Horse Fund.

The wild horses of North Carolina’s Currituck Outer Banks have survived more than four centuries of hurricanes, fierce winter nor’easters, and swarms of biting insects. Graced with a strong, inner sense of self-preservation, the horses enjoy a rich and distinguished history.

The Outer Banks consist of a series of barrier islands made entirely of sand. They stretch 175 miles south from the Virginia border to Cape Lookout National Seashore. Once a hideout for pirates, the area now attracts hundreds of thousands of tourists. What has been good for the economy has taken a toll on the wild horses. Expensive vacation homes have replaced secondary dunes once covered by sea oats. Vast stretches of open land from the town of Duck to Corolla have disappeared. According to National Geographic, five to six thousand wild horses lived up and down the state’s coast as recently as 1926. Now, only about 220 remain. A herd of one hundred wild horses lives on the north beaches of Corolla, in Currituck County. The others live on Shackleford Banks—part of the Cape Lookout National Seashore—in Carteret County.

These horses descended from the fine horses of Spanish conquistadors—Colonial Spanish Mustangs brought to the New World from Spain, as well as from breeding farms in the West Indies and South America. Because Spanish exploration was approved and funded by the country’s king and queen, only the finest stallions and mares went along on those journeys. By 1500 large breeding ranches had been established to produce the best horses of that time—the horses of rulers and nobility—with a mixture of Spanish Barb, Arabian, and Andalusian blood.

Three main theories exist as to how the horses ended up in the Outer Banks of North Carolina. One states that as ships wrecked and sunk, the strongest horses aboard may have swum to the barrier islands. Another is that as some ships hit dangerous sandbars, they could no longer float. Excess weight had to be pushed overboard, including animals. The third is that they were left behind when a colony was abandoned due to disputes with American Indians or devastating illnesses.

Regardless of how the wild horses of the Outer Banks arrived, they have become an icon and part of both North Carolina’s and America’s heritage. The Shackleford and Corolla herds are registered Colonial Spanish Mustangs. Their small numbers have placed them on the critical breed list of the American Livestock Breed Conservancy and the Equus Survival Trust. Both national groups work to save endangered breeds of livestock. The next category is extinction.

The Shackleford horses enjoy federal protection from the Shackleford Act written in 1997 by U.S. congressman Walter B. Jones. The herd must be maintained at a size of no less than 120 to 130 horses to keep it genetically healthy.