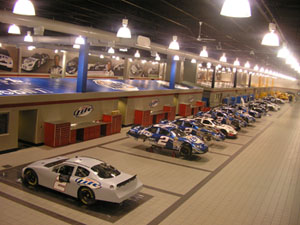 The effort to designate stock car racing as the Official State Sport was led by team of students at Lake Norman Elementary and Mount Mourne IB School in Iredell County who referred to themselves as "the Pit Crew." Students presented the idea at a meeting of the Mooresville Board of Commissioners on February 21, 2011. Board members voted unanimously to support the efforts to propose the new symbol to the North Carolina General Assembly.

A survey on the Iredell-Statesville Schools Web site and a Facebook page (https://www.facebook.com/NCStateSport) helped others show support for the students' efforts.

The bill passed the North Carolina General Assembly on June 16, 2011 and was signed by Governor Bev Perdue on June 21, 2011 at the Charlotte Motor Speedway. Special guests included fourth and fifth grade students and NASCAR Hall of Fame inductees.

Minutes, Mooresville Board of Commissioners. February 21, 2011.