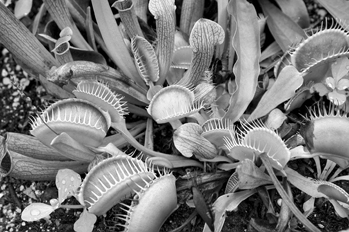 The Venus flytrap (Dionaea muscipula), one of the few carnivorous plants on earth, grows naturally along a small section of the North Carolina and South Carolina coastline within a 75-mile radius of Wilmington. It prospers only in humid, boggy areas such as the Carolina Bays. The traps, which grow in a rosette, are formed by pairs of modified leaves that resemble clam shells and have spikes along their edges; the inner surfaces of the leaves are equipped with reddish glands that attract insects and arachnids. When an insect touches this surface twice in rapid succession, tiny hairs act as a trigger to close the trap rapidly. Digestion requires seven to ten days depending upon the size of the insect. In 1750 North Carolina's royal governor, Arthur Dobbs, called attention to this unusual plant, described as a "carnivorous vegetable" by botanist William Bartram in 1794. Charles Darwin described it in Insectivorous Plants (1875) as "the most wonderful plant in the world."

A cluster of Venus flytraps (with spiked “traps”) and pitcher plants growing in southeastern North Carolina. Photograph by Johnny Randall.