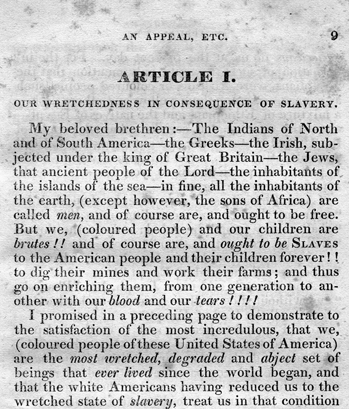 Walker's Appeal, actually titled Appeal to the Coloured Citizens of the World, was an emotionally charged, powerful antislavery pamphlet published by black Wilmington native David Walker in September 1829 and widely distributed across the South. It appeared in three editions, probably printed in Boston. Although Walker himself was born free, taking the legal rank of his mother, he was deeply troubled by the slave status of his father, who died before Walker was born. After traveling widely, young Walker settled in Boston, where he dealt in second-hand clothing and was active in antislavery causes.

No record has been found of Walker's education, but in his writing there is evidence of literary ability and historical knowledge. His Appeal advocates the overthrow of the slave system, through violence if necessary. Even such abolitionist leaders as William Lloyd Garrison objected to Walker's overly radical ideas and tone. Nevertheless, the Appeal was intended to strengthen blacks' resolve and give them hope of freedom. Reaction among slave owners in North Carolina, Georgia, and Virginia, where copies were smuggled in from Boston and New York, was, predictably, prompt and harsh.

Walker, David. Walker's appeal, in four articles; together with a preamble, to the coloured citizens of the world, but in particular, and very expressly, to those of the United States of America, written in Boston, state of Massachusetts, September 28, 1829. Third edition. Boston. 1830. https://archive.org/stream/walkersappealinf00walk#page/n3/mode/2up  (accessed August 29, 2012).

"Report relative to the government of slaves and free persons of color," from Documents printed by order of the General Assembly at its session of 1830/31. https://archive.org/stream/documentsprinted00nort#page/n131/mode/2up