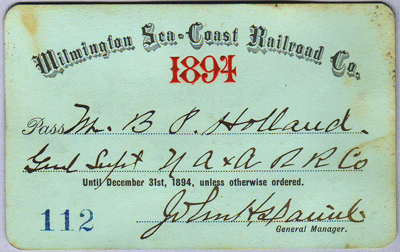 The Wilmington Sea Coast Railroad, also known as the Wilmington & Sea Coast Railroad, was chartered in 1887 to provide transportation between Wilmington and Wrightsville Beach. On 12 June 1888 a standard-gauge line for operation with steam engines was completed at a cost of about $30,000; it covered 10.3 miles from a junction with the Wilmington & Weldon Railroad at Wilmington to Hammocks, just across Banks Channel from Wrightsville Beach. At Hammocks, passengers transferred to the 1.5-mile Sea View (later Ocean View) Railway, built in 1889, to cross the channel on a trestle to Atlantic Station at Wrightsville Beach. Among the promoters of the road were William A. Berry and William Lattimer of Wilmington; Lattimer was its first president (the Bessie, the first locomotive, was named for Lattimer's daughter). In 1889 the Wilmington Sea Coast purchased the Ocean View to provide through service, and in April 1902 the entire line was electrified and merged with the Wilmington street car system to become the Consolidated Railways, Light, and Power Company.

Charles Kernan, Rails to Weeds: Searching Out the Ghost Railroads around Wilmington (1988).