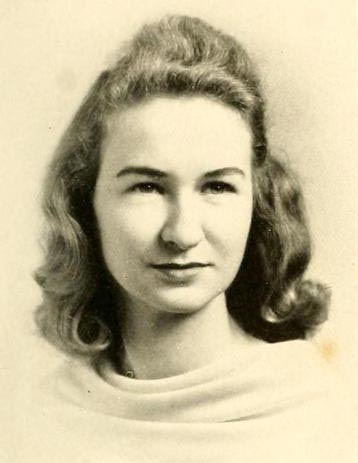 Eleanor Elaine Thompson was born on June 5, 1921 in Salisbury, North Carolina.  She was in the fourth class of WASPs (Women Airforce Service Pilots) who graduated from the civilian military training program in 1943.

She graduated from Spencer High School and then attended Catawba College, earning her degree in 1942.  At Catawba, she majored in Business and joined many activities. She was a cheerleader, member of the Writer’s Club, Editor of the the College Annual, the “Tom Tom”, an editor of the yearbook, the “Sayakini,” and also served as Class President during her senior year.

She later said that she had a dream of learning to fly since she was a child, so while she was at Catawba she jumped at the chance to enroll in a civilian pilot training class and earn her pilot’s license. The civilian pilot training program was instituted by the federal government at colleges across the country to train pilots in order to address a pilot shortage during World War II. Only a small number of women were accepted into the program and she was one of them.

In an oral history interview, Eleanor recalled watching airmail planes as a child, hearing stories of barnstormers from her father and always knowing that she would learn to fly someday.  Recalling that her father was a mailman for the railroad and that the family had little money, she knew that she had “an icicle’s chance in hell” of learning to fly. She recalled taking home two applications, one for herself and one for her brother, and receiving her mother’s reaction: it was too dangerous and no Southern lady would do that.  But her parents agreed to let her, and she learned to fly with 9 boys, including her brother. She earned her license and was desperate to keep flying, so she wrote newspaper articles for the local air field in exchange for free flying time in Piper Cub airplanes.

After college she was eager to leave Salisbury, so she moved to Washington, D.C. to work for the Civil Aeronautics Administration as a typist. In 1943, she was encouraged to apply to the newly created training program for women pilots, known as the Women Airforce Service Pilots and referred to as WASPs. The WASP program was a civilian program attached to the U.S. Army Air Forces that trained and employed women to fly military planes during World War II. The women who graduated from training were attached to military bases around the country and given a variety of non-combat flight-related jobs, including flying transport planes and working as test pilots. The program ended in 1944.  In any case, Eleanor was admitted to the program and traveled to Sweetwater, Texas for training at Avenger Field.  She graduated several months later and was posted to Love Field at Dallas, Texas. There she flew Class III planes and was later transferred to Victorville Army Air Base in California, about 75 miles north of Los Angeles, where she flew planes as a test pilot.

After the war and following the end of the WASP program, she began working at Standford University.  She later moved to Sao Paulo, Brazil where she taught mathematics and English in an aviation school. In Sao Paulo she met and married James H. Wortz, also a teacher at the school.

The Wortzs returned to California and started a family.  They had two children, William Howard and Marc Steven. Eleanor Wortz later taught at the College of San Mateo and was active in the community and her church. Her husband pre-deceased her, passing away in 1990. Eleanor passed away in Los Altos, California on August 18, 2019.  She was 92 years old.

In 2011, Eleanor Wortz published a memoir of her flying career and time with the WASPs, Fly gals of World War II: Women Airforce Service Pilots (WASP).

Watch and listen to an audio-video recording of an oral history interview with Eleanor Wortz taken on May 30, 1998, from the Veterans Oral History Program, State Archives of North Carolina, found at: https://digital.ncdcr.gov/digital/collection/p16062coll35/id/35