Maya Angelou was best known as a poet and the best-selling author of I Know Why the Caged Bird Sings (1970). Angelou was also a singer, dancer, Grammy-winning composer, director, and actress. She was hailed as an internationally regarded figure for her role as a civil rights leader who fought for social and racial justice.

Angelou resided in Winston-Salem, North Carolina for over thirty years. Dr. Angelou moved to North Carolina in 1981 after accepting a lifetime teaching position at Wake Forest University as the first recipient of the Reynolds Professor of American Studies. During her career as a tenured professor, Angelou taught a variety of subjects, including science, theology, theater, writing, ethics, and philosophy.

In addition to teaching at Wake Forest, Angelou positively impacted her local North Carolina community in other ways. Angelou gave her name and support to the Maya Angelou Center for Health Equity at Wake Forest School of Medicine. The Center aims to close disparities in the quality of healthcare for minorities, focusing largely on African Americans, Hispanics/Latinos, and American Indians.

She was the recipient for the North Carolina Award for Literature in 1987.

Maya Angelou was born Marguerite Johnson on April 4, 1928 in St. Louis, Missouri to Vivian and Bailey Johnson. Her parents divorced when she was three years old, and as a result Angelou moved around as a child. She was raised in St. Louis and Stamps, Arkansas, and spent much of her childhood being raised by her grandmother. I Know Why the Caged Bird Sings (1970) is the first, and most famous, installment of her seven-volume autobiographical series. This work gives an account of Angelou's troubled upbringing, focusing largely on the long-term impact of the sexual abuse she endured at age eight.

Angelou won a scholarship to San Francisco’s Labor School to study dance and drama. Although she dropped out briefly when she was fourteen to become the first female cable car conductor in San Francisco, she eventually returned to George Washington High School in San Francisco to graduate. Soon after graduation, Angelou gave birth to her first son, Clyde (later renamed Guy), and worked in restaurants to support her family. The second of her autobiographies, Gather Together in My Name (1974),begins when Angelou is seventeen, picking up where I Know Why the Caged Bird Sings ends. Gather Together in My Name portrays Angelou’s struggle for survival as a single black woman raising a young son.

In the 1950s, when Angelou was in her twenties, she began to pursue a career in the entertainment industry. During this time, she travelled worldwide as a performer and a writer. Between 1954 and 1955, Angelou toured Europe as a cast member of Porgy and Bess, an opera set in South Carolina. Angelou’s travels across Europe and her work as a performer are captured in her third autobiography, Singin’ and Swingin’ and Gettin' Merry like Christmas (1976). In 1957, she recorded her first album, Calypso Lady, which was followed by her move to New York City to join the Harlem Writers Guild and pursue acting.

In 1960, Angelou left New York and moved to Cairo, Egypt with civil rights activist Vusumzi Make, where she worked as the editor of The Arab Observer. A year later, she moved to Ghana where she worked as the feature editor for The African Review and taught at the University of Ghana’s School of Music and Drama. During her time abroad, Angelou became fluent in Fanti, a West African language, French, Spanish, Italian, and Arabic. In 1981, Angelou published the fourth volume of her autobiography, The Heart of a Woman, spanning 1957 to 1962. This work captures her life during her travels both within the United States and abroad, raising a teenage son, and her involvement in the beginnings of the civil rights movement. The fifth volume of her autobiography, All God’s Children Need Traveling Shoes, published in 1986, delves deep into her years spent in Ghana, where she began to discover her heritage as an African American woman.

Maya Angelou was heavily involved in the Civil Rights Movement during the 1960s. In 1964, Angelou returned to the United States to work with the Organization of African American Unity, led by Malcom X. When the organization collapsed after Malcolm X’s assassination, Angelou began working with Martin Luther King, Jr. to promote the Southern Christian Leadership Conference through her role as Northern Coordinator. A Song Flung up to Heaven, published in 2002, is the sixth installment of her autobiographical series, and provides a personal account of Angelou's role as an influential leader of the civil rights movement between 1965 and 1968.

In the 1970s, Angelou continued to have 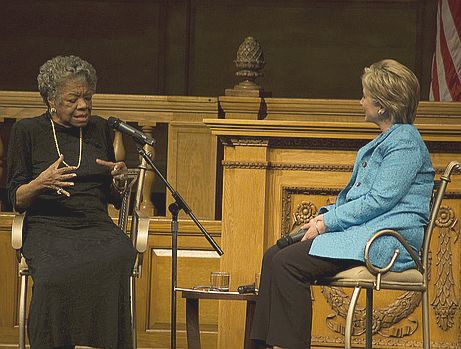 a successful career and break social and racial boundaries as a black woman. In 1972, she was nominated for a Pulitzer Prize for Just Give me A Cool Drink of Water ‘fore I Diiie” (1971), her first anthology of published poems. Like Angelou’s previous work, these poems eloquently enlightened readers on issues of human rights, highlighting the struggles faced by African Americans, minorities, and women.

Angelou began to heavily pursue a career in theater. In 1972, Angelou wrote and scored the film Georgia, Georgia, becoming the first African American woman to have a screenplay produced. Her artistic pursuits continued, and she was nominated for a 1973 Tony Award for Best Supporting or Featured Actress (Dramatic) for her role in Look Away. She was nominated for a 1977 Emmy Award for her role in Alex Haley’s television miniseries Roots, and also appeared in John Singleton’s 1993 film Poetic Justice. In 1996, Maya Angelou directed her first feature film, Down in the Delta. This film was nominated for a 1998 Audience Choice Award and a 1999 Black Film Award for Best Director. Angelou was the first African American woman to direct a major motion picture.

Throughout her career, Maya Angelou published numerous children’s books, collaborated on several documentaries, composed music for singer Roberta Flack, received three Grammy Awards, worked on two presidential committees, and received over thirty honorary degrees. In 1993, Angelou, at the request of President Clinton, composed and read a poem at his inauguration.  In 2000, Maya Angelou was awarded the Presidential Medal of Arts. In 2011, she was awarded the Presidential Medal of Freedom.

In 2010, Angelou celebrated her 82nd birthday with a garden party held at her home in Winston-Salem, North Carolina. The party was sponsored by Lowes Home Improvement, a North Carolina-based hardware store chain. Guests included singers Naomi Judd and Martina McBride, and director Lee Daniels. Local university educators were also in attendance, including Dr. Jimmy Jenkins, Senior President of Livingstone College in Salisbury, NC and John Mauceri, Chancellor of the North Carolina School of the Arts in Winston-Salem.

In 2013, she published the seventh and final installment of her autobiography, Mom & Me & Mom, which focused on her relationship with her mother, who passed away in 1991.

On January 14, 2012, Angelou presented with Michelle Obama during the BET Honors 2012 in Washington, D.C. at the Warner Theatre.