by Matthew Franke, 2013, University of North Carolina at Chapel Hill 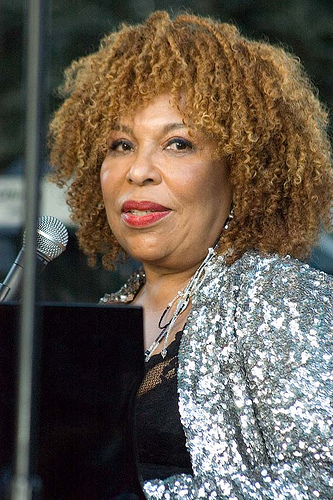 Roberta Flack is a Grammy-winning singer, songwriter, and pianist renowned for her smooth, "velvety" voice. Born in Black Mountain in Buncombe County on February 10, 1937, she was one of four children of Laron and Irene Flack. Her family moved to Arlington, Virginia by the time she was five. Both her parents played the piano, and her mother played the organ in church. Flack was exposed to gospel music from an early age, as Mahalia Jackson sang at another church across the street from her house. When she was nine, Flack began piano lessons; when she was thirteen, she won second prize in a piano competition for African American students.

An outstanding student, she graduated from high school at fifteen and won a full scholarship to Howard University in Washington, D.C. Flack’s first ambition was to be a classical concert pianist; later she began studying the voice, hoping to become an opera singer. Flack never lost her fondness for classical music (her favorite composers include Robert Schumann and Johann Sebastian Bach). She graduated with a bachelor’s degree in music education, but her father’s untimely death in 1959 interrupted her plans to pursue graduate study. Flack began teaching music and English in public schools in order to help support her family. Her first job was at an African American school in Farmville (Pitt County); later, she worked in junior high schools in the Washington, D.C. metropolitan area.

Meanwhile, Flack continued to develop her musical skills. She worked as an accompanist in vocal studios, including one run by Todd Duncan (the first Porgy from George Gershwin’s Porgy and Bess), and Frederick Wilkerson, with whom she studied classical singing. (Wilkerson also introduced her to Maya Angelou, with whom she would later collaborate). In 1962, Flack began accompanying opera singers at the Tivoli Opera Restaurant in Georgetown; eventually, she began singing and playing popular, blues, gospel, R&B songs there as well . During this period her music was influenced by Nina Simone. Her success led to further engagements at many clubs in Washington, including Mr. Henry’s, the Capitol Hill Club, and the 1520 Club. These early engagements earned her many fans, including Woody Allen, Liberace, Johnny Mathis, and Bill Cosby.  Around this time, she also met Steven Novosel, a jazz bassist, whom she married in 1965. In 1967, she quit teaching in order to focus on her musical career.

Flack’s breakthrough came in 1968. The jazz pianist Les McCann heard her perform and sent a tape of her music to Atlantic Records. Flack signed with Atlantic and in 1969, released her debut album, First Take, which initially did not chart. However, her appearance on The Third Bill Cosby Special in 1970 and the use of her single “The First Time Ever I Saw Your Face” in Clint Eastwood’s film Play Misty for Me (1971) gave her significant exposure. By 1972, the single had risen to #1 on the pop charts and won a Grammy award for record of the year. The album eventually reached #1 on the R&B chart and #3 on the jazz chart.

The following years were a period of almost unbroken successes, marred only by her divorce in 1972. Flack appeared at both the Montreux and Newport Jazz Festivals in 1971. She performed in John Lennon and Yoko Ono’s One-to-One/Give Peace a Chance concerts and played a concert at Carnegie Hall (both in 1972).  Her single “Killing Me Softly with His Song” (1973) reached #2 on the pop and R&B charts (and #1 on Billboard’s Hot 100), while “Feel Like Making Love” (1974) reached #1. Killing Me Softly (1973) was her most successful album, certified double platinum.  Flack also recorded duet albums with Donny Hathaway (1972, 1980: the hit single: “Where is the Love,”) and Peabo Bryson (1983: the hit single “Tonight I Celebrate My Love”).

Flack released fewer records and had fewer hits throughout the 1980s and 1990s, instead devoting a good deal of time to touring. She contributed to the album for Yoko Ono, Every Man Has a Woman (1984), toured Japan in 1986, 1988, and 1989, and played at the Toronto Jazz Festival with Miles Davis in 1987. Oasis (1988) was her last album to place in the top 40: the title track reached #1 on the R&B charts, while the album as a whole reached #24. The album also featured the results of Flack’s friendship with Maya Angelou, who wrote lyrics for “And So It Goes.” From 1995 to 1998, Flack hosted a radio show, “Brunch with Roberta Flack;” in 1999 she toured South Africa.

Flack’s musical style has been fluid, moving between jazz, folk, soul, R&B, and pop. Flack has tended to sidestep stylistic definitions, commenting on her reputation as a jazz performer, for example, that: “I don’t enjoy being labeled as a jazz musician. I think it’s limiting.” The popularity of her slow, passionate ballads with confessional lyrics underpinned by her piano work (“Killing Me Softly With His Song,” “The First Time Ever I Saw Your Face”) has led to occasional charges of monotony. Something of her wide stylistic range, however, can be seen from her early covers of folk and folk rock songs (Bob Dylan’s “Just Like a Woman” and Simon and Garfunkel’s “Bridge Over Troubled Water”), gospel songs (“I Told Jesus”), and funk-influenced soul tracks (“Go Up Moses”). In the 1980s her music was influenced by disco and dance-pop (“You Are My Heaven” and “Oasis”). Her most recent albums have been exclusively devoted to covers: popular standards (Roberta, 1994), holiday music (The Christmas Album, 1997), and the Beatles (Let It Be, 2012).

Roberta Flack has earned various awards and honors throughout her career. In 1972, Washington, D.C., declared April 22 to be Roberta Flack Human Kindness Day. She has won a total of four Grammys (all between 1972 and 1974). In 1999, she was awarded a star on the Hollywood Walk of Fame. In 2007 she founded the Roberta Flack School of Music at the Hyde Leadership Charter School in New York City. In 2009, she was inducted into the North Carolina Music Hall of Fame.

Munger, Guy. “A Singer Who Dreamed her Own Impossible Dream.” News and Observer, 12 July 1987.