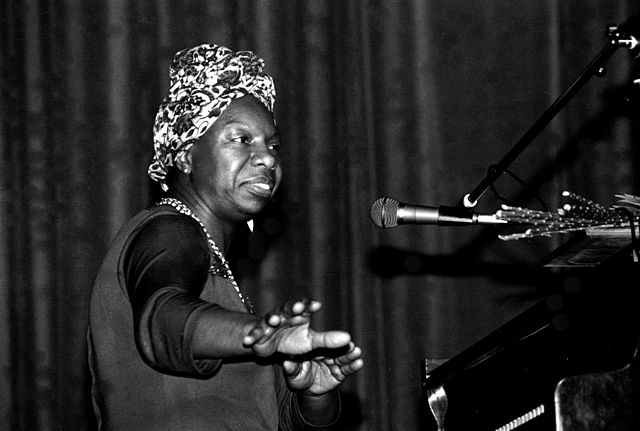 The artist who would come to be known across the world as Nina Simone was born Eunice Kathleen Waymon on February 21, 1933, in Tryon, North Carolina in Polk County. She was the sixth of eight children born to Mary Kathleen, a minister, and John Divine Waymon, a barber and handyman. Both her parents were musical, and Eunice displayed great musical talents at an early age. By the age of six, she started taking classical piano lessons, developing her lifelong love of the music of Johann Sebastian Bach. She completed her secondary education at the Allen High School for Girls in Asheville, attending from September 1945 to June 1950.

For much of her early life, Eunice Waymon dreamed of becoming one of the first nationally successful African-American concert pianists. After her graduation, she spent the summer of 1950 at the Juilliard School, preparing for an audition at the Curtis Institute of Music in Philadelphia. Her application, however, was denied. As her family had relocated to Philadelphia in the expectation of her entry to Curtis, the blow to her aspirations was particularly heavy, and she suspected that her application had been denied because of racial prejudice. Discouraged, she took private piano lessons with Vladimir Sokoloff, a professor at Curtis, but never re-applied to the institution. For several years, she worked a number of menial jobs and taught piano in Philadelphia.

In the summer of 1954, Eunice Waymon took a trip to Atlantic City, N.J., where she first played the piano in nightclubs. While she had been exposed to popular music, her musical orientation remained chiefly classical. However, under pressure from management, she began singing popular songs while accompanying herself on the piano; in order to keep her performances in bars and nightclubs hidden from her mother, she took the stage name Nina Simone.

Word of her talent spread and Simone became in demand at nightclubs on the Mid-Atlantic coast. In 1958, she released her first album, Little Girl Blue. Highlights of her early career included her 1959 performance at the Town Hall in New York; her trip to Nigeria in 1961; a performance at Carnegie Hall in 1963; and a European tour, including her first performances in Paris, in 1965. She also appeared at the Newport Jazz Festival in 1960, and the Montreux Jazz Festival in 1968.

Simone’s work took on an explicitly social dimension during the 1960s when she became involved in the Civil Rights movement. Following her rise to fame, Simone had become close with leading African-American intellectuals, including Langston Hughes, James Baldwin, LeRoi Jones (later Amiri Baraka), and Lorraine Hansberry. After the Birmingham bombings in September 1963, Simone wrote an original song, "Mississippi Goddam," directly addressing civil rights. "You don’t have to live next to me/Just give me my equality/Everybody knows about Mississippi," she sang, and began to use her concerts as an opportunity to honor members of the Student Nonviolent Coordinating Committee (SNCC).

While Nina Simone worked feverishly in the 1960s, releasing thirteen studio albums in that decade alone, the 1970s were far less productive. Overwork and a painful divorce from husband/manager Andy Stroud led to her taking a good deal of time off from performing and recording, visiting Barbados and Liberia. and In 1976, she moved to Switzerland. On a trip back to the United States in 1977, she was convicted of tax evasion. A suicide attempt and the increasing onset of mental problems (probably bipolar disorder), further darkened the decade. Nina Simone only released two studio albums in the 1970s; a seven-year gap separated Here Comes the Sun (1971) from Baltimore (1978).

For much of the 1980s, Nina Simone was based more in Europe than in America. She worked in Paris,; performed notably at the Newport Jazz Festival in 1985, and at Montreux in 1987 and 1990. Her last live albums also date from this period. Her career began to slow down; in 1991, she published her memoirs, and in 1992, she moved to a small town in the south of France. But she continued to perform: her last record, A Single Woman, was released in 1993, and she also appeared on solo albums by Pete Townshend and Miriam Makeba. Nina Simone continued to perform to the end; shortly before her death she was considering another concert tour.

Nina Simone died at her home in Carry-le-Rouet, France, on April 21, 2003. About a month later, the Curtis Institute, which had denied her application so many years before, granted her an honorary degree. She had already received honorary doctorates from Malcolm X University (1972) and Amherst College in Massachusetts (1977). In 2009, she was inducted into the North Carolina Music Hall of Fame.

While Nina Simone was commonly known as "the high priestess of soul," her repertoire included music drawn from a wide variety of musical styles. Her piano playing was strongly influenced by her early classical training even when playing popular standards, as can be heard on her rendition of "Love Me or Leave Me." She also performed North Carolinia folk songs, such as "Black is the Color," jazz and popular standards, and blues and gospel songs. She ranged from protest songs, such as "Mississippi Goddam" and "Four Women" to classic standards like George Gershwin’s "I Loves You, Porgy" (from Porgy and Bess). Personally, Simone refused any easy categorization of her music, describing it as "black classical music."

Hampton, Sylvia, and David Nathan: Nina Simone: Break Down & Let It All Out. London: Sanctuary Publishing, 2004

Simone, Nina, and Stephen Cleary. I Put A Spell On You: The Autobiography Of Nina Simone. London: Ebury Press, 1991.