by Matthew Franke, 2013, University of North Carolina at Chapel Hill

Tori Amos is a singer, songwriter, pianist, and producer best known for her confessional lyrics and piano-based alternative rock music style. She was born Myra Ellen Amos on August 22, 1963 in Newton, N.C. (Catawba County). Her father, Edison Amos, was a Methodist preacher; her mother, Mary EllenAmos, quit college upon marriage. As a child, Amos spent several summers in North Carolina with her grandparents, although her family lived in Baltimore, Maryland for much of her childhood. Amos had a close relationship with her maternal grandfather, Calvin Copeland, a member of the Eastern Cherokee Nation. 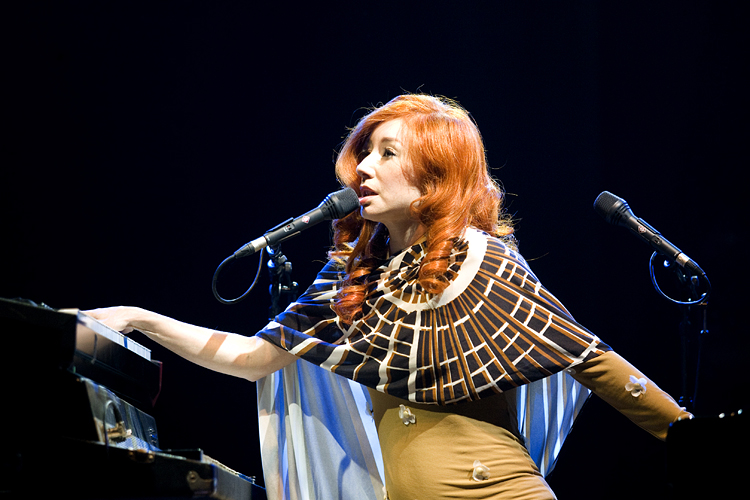 At the age of two-and-a-half, she began to play the piano, and from 1968, Amos was enrolled in the Peabody Conservatory of Johns Hopkins University on a full scholarship, taking classes on the weekends. Although Amos was fond of the music she studied in the Conservatory (Mozart, Beethoven,  Bartok) she gradually lost interest in her work at Peabody because her interest in popular music (particularly the Beatles, Led Zeppelin, Joni Mitchell, Stevie Wonder, and Elton John) was not encouraged. Amos also struggled with learning to read music; she preferred improvising and playing by ear instead. In 1974, Amos lost her scholarship to Peabody, ending her connection with the school. Amos increasingly turned towards popular music; at the age of thirteen she began playing in clubs in the Washington, D.C. area, chaperoned by her parents.

Amos continued to develop her musical skills, winning a local talent competition in 1977, and leading a church choir from 1978. She released her first recording in 1980, a song she co-wrote called “Baltimore,” and continued to play the piano in clubs in the D.C. area and as far afield as Myrtle Beach, S.C. Along the way, Amos adopted a new stage name, “Tori.” By the age of twenty-one, Amos moved to Los Angeles to try to break into the recording industry; eventually, she received a multi-record contract with Atlantic Records. Her first album was a pop-rock effort titled Y Kant Tori Read (1988). Its failure brought Amos widespread ridicule and led Amos to a nervous breakdown (Amos has since disowned the album). In the wake of Y Kant Tori Read’s failure, Amos decided to return to her earlier style as a piano-playing singer-songwriter. Atlantic Records helped Amos re-launch her career from London, where she played in clubs while preparing her second album.

Amos scored a breakout performance when she opened for the Moody Blues at the Montreux Jazz Festival in 1991, performing songs which would eventually be released on her breakthrough album Little Earthquakes (1992), which went multi-platinum by 1999. The record (#54 on Billboard’s Top 200, #14 on the UK album chart) featured some of Amos’s mostpopular songs (“Crucify,” “Girl,” “Silent All These Years”), as well as her introspective description of a rape, “Me and a Gun,” which drew on her own experience from the early 1980s. The same year Amos toured the world with appearances in the United Kingdom, Germany, the Netherlands, Italy, Canada, Australia, South Korea, Israel, Iceland, Switzerland (including another appearance at Montreux), and the United States. The video for “Silent All These Years” was nominated for four MTV awards, although it did not win in any category.

Subsequent albums solidified Amos’s success. Under the Pink (1994) reached #1 in the UK and #12 in the US, again reaching multi-platinum; the single “God” reached #1 on Billboard’s US Modern Rock Tracks, despite its controversial music video, which depicted Amos lying on a floor while rats crawled over her. Boys for Pele (1996) reached #2 in both the UK and the US, and went platinum in only seven months. The funky single “Professional Widow” topped the US Dance chart and became popular in various remixes.

Amos’s subsequent work was highly eclectic, and broadened her early piano-based sound. She co-wrote songs with Peter Gabriel for the film Virtuosity (1995) and with Patrick Doyle for the film Great Expectations (1998) and toured with Alanis Morissette in 1999. From the Choirgirl Hotel (1998) had a more explicitly guitar-based sound and featured a song reacting to her miscarriage (“Playboy Mommy”). Amos released a string of concept albums in the early 2000s. Strange Little Girls (2001) was an eclectic covers album, featuring songs by Eminem, Neil Young, the Beatles, and the Velvet Underground. Scarlet’s Walk (2002) offered a portrait of the United States in the wake of 9/11. American Doll Posse (2007) featured no less than five alter egos singing some of Amos’s most explicitly political songs (“Yo George,” “Dark Side of the Sun”).

Most recently, Amos has returned to her classical roots. Midwinter Graces (2009) was a re-imagined Christmas album. Night of Hunters (2011), which she describes as a “song-cycle,” appeared on the classical label, Deutsche Grammaphon. This album was also the first by a female artist to appear simultaneously in the top ten on the Alternative (#5), Rock (#7), and Classical (#1) charts. Gold Dust (2012) consists of orchestral arrangements of her songs performed by Amos and the Metropole Orchestra; the single “Flavor” reached #1 on the US Dance chart. Amos has also written a musical, The Light Princess, with a book and lyrics by Samuel Adamson, which is set to premiere in London in September 2013.

Amos’s musical style has been shaped by influences as divergent as John Lennon, whom Amos describes as “my biggest influence,” and classical composer Bela Bartok, whom Amos cites as an influence on the unusual formal patterns in her songs. Her lyrics are often confessional or employ stream-of-consciousness techniques; major topics include religion (“God,” “Father Lucifer”) and female sexuality (“Icicle”).

Amos is a well-known advocate for victims of sexual assault and abuse. In 1994, she helped to found RAINN, the Rape, Abuse, & Incest National Network (for which she raised $250,000 in a single concert in 1996). In 1994, she received a Visionary Award from the DC Rape Crisis Center.

Amos married English sound engineer Mark Hawley in 1998. They have one daughter, Natashya Lórien Hawley, born in 2000, who sang on Night of Hunters (2011). Amos and Hawley own homes in Florida, Ireland, and the United Kingdom.

Amos has been nominated for eight Grammy awards between 1995 and 2002, but never won. In October of 2012, Amos was inducted into the North Carolina Music Hall of Fame. In 2012, Night of Hunters received the Klassik ohne Grenzen (classical crossover) award from ECHO Klassik. As of 2013, she has released thirteen albums, several live albums, hit collections, and bootlegs.