Part vi: Federal Recognition and the Fight for Cherokee Rights

During the Civil War, the most serious Cherokee losses resulted not from the conflict itself but from smallpox brought by a returning tribal member who had joined the Union forces. The vaccine provided by a doctor proved ineffective. Disillusioned by white medicine, the Cherokee attempted traditional cures again, which as before proved no match for the deadly disease. After the war, Thomas sought official permission for the Cherokee to remain in North Carolina. In 1866—in recognition of Cherokee ownership of land as well as their efforts to aid the Confederacy during the Civil War—North Carolina acknowledged the legal right of the Cherokee people to reside in the state. Two years later, the U.S. Congress recognized the Eastern Band of Cherokee Indians as a separate entity from their brethren in Oklahoma and directed the secretary of the interior to assume the same guardianship of the tribe. The Eastern Band adopted a constitutional government in the 1870s that provided for two chiefs and for council representatives from each Cherokee community. The Cherokee received the right to vote, although they were disfranchised along with African Americans by the 1900 North Carolina General Assembly. Soon the first English-language schools for the Cherokee were established; these, however, often attempted to destroy traditional beliefs and practices, forbidding the children to use the Cherokee language. This situation was not reversed until late in the twentieth century, when the Cherokee school system reintroduced courses in Cherokee language and culture.

In the early twentieth century, a shift in federal emphasis encouraged the coexistence of tribal membership with state and federal citizenship. Eastern Cherokee citizenship status had not been fully resolved when World War I began, but approximately 70 members of the Eastern Band of Cherokee Indians were drafted or joined the armed forces. The largest single group served in the 321st Infantry Regiment, which also included some Lumbee Indians from eastern North Carolina. On 16 Nov. 1919, a congressional act granted citizenship to Indians who had served in the armed forces during World War I. In spite of this, the Cherokees fully regained voting rights only in 1946, with the return of Cherokee veterans from World War II. 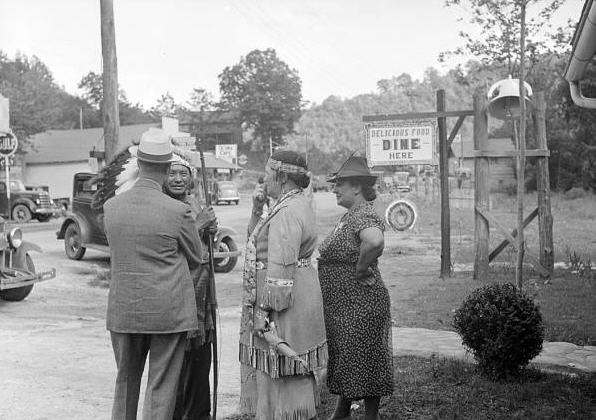 In 1924 the Eastern Band of Cherokee Indians and the federal government agreed to put Cherokee tribal lands in trust. As a result, North Carolina state law did not apply to Cherokee lands within the Qualla Boundary. While most Indian reservations were carved out of existing federal property and set aside for individual tribes, the federal government never owned the lands comprising the Qualla Boundary in North Carolina.

The economy of western North Carolina in the early twentieth century was dominated by the timber industry, and when the timber boom ended in the mid-1920s, Cherokee people had little to fall back upon. Tourism became an important economic boost to the Cherokee beginning at this time. Substantial economic relief came only when the New Deal programs of the mid-1930s provided jobs and the opening of the Great Smoky Mountains National Park near Cherokee land brought large numbers of visitors to the area.

In 1953 a new federal policy was designed to extend civil and criminal protection to reservation Indians in specific states. This policy ultimately failed; it was followed by the 1968 Civil Rights Act, which provided specific protections for individual tribal members and limitations on tribal governments. In 1971 the North Carolina General Assembly created the Commission of Indian Affairs to deal with a broad range of Indian concerns. Subsequent decades have witnessed renewed interest in and respect for Indian culture. The commission was created to assist Cherokees and other Indians in gaining access to local, state, and federal funds; to help tribal communities establish social, educational, and economic development programs and enhance economic self-sufficiency; to protect Indian rights and interests when necessary; and to ensure that Indians are permitted to pursue their cultural and religious traditions.

"A postwar photograph of the Cherokee who fought in Thomas's Legion." North Carolina Museum of History, Raleigh, NC, USA.