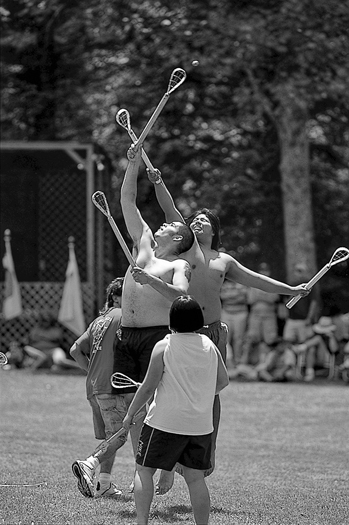 Despite many acts of Congress and more than 40 court decisions specifically related to the Cherokee in North Carolina, questions have continued to arise concerning tribal, state, and federal jurisdictions. The modern charter and governing document of the Eastern Band was adopted in 1986 and has 24 sections covering tribal officers, qualifications for office, and council meetings. The Cherokee code, published in 1998, consists of 36 chapters on a wide range of subjects. Court cases may be handled in tribal, state, or federal court, depending on the persons and subject matter in question. A Tribal Council of 12 members and a principal and vice chief carry out the executive and legislative functions, while a Court of Indian Offenses handles judicial matters not under federal jurisdiction. The largest section of the Qualla Boundary, approximately 50,000 acres, surrounds the Swain County town of Cherokee. Sixty miles away, in Graham County, a parcel of 2,250 acres is occupied by about 400 members of the Cherokee's Snowbird Community. Another 5,575 acres of Cherokee land lies in various parts of Cherokee County. Individual Cherokees can sell or exchange their land only to other Eastern Band tribal members.

The Eastern Band's approximately 13,000 tribal members, those living on or off the Qualla Boundary, were by the early 2000s leading lives reflective of both their Cherokee heritage and the diversity of American culture and society. Working as business owners, teachers, police officers, medical professionals, and homemakers as well as Cherokee historians, storytellers, and craftsmen, modern Cherokee people are bound by their desire to remain faithful to Cherokee traditions. This desire often informs many of the decisions made by tribal leaders.

The town of Cherokee is both the spiritual and governmental center of the Eastern Band and a thriving tourist spot dedicated to enlightening visitors about Cherokee culture, tradition, and current affairs. The Oconaluftee Indian Village Living History Museum, the Museum of the Cherokee Indian, the Qualla Arts and Crafts Mutual, and many important historic and natural sites around the town offer opportunities for firsthand, authentic encounters with Cherokee history. Cherokee One Feather, a weekly broadsheet newspaper owned and published by the Eastern Band of Cherokee Indians in Cherokee, was launched in 1966 as a three-to-four-page weekly under the supervision of a tribal publications committee. Its content is tightly focused on matters of tribal interest, including local news, commentary, arts and entertainment, sports, and community announcements.

Cherokee festivals and events include the presentation, during the summer months, of Unto These Hills, an outdoor drama portraying the history surrounding the Trail of Tears; the Cherokee Fall Fair; the annual Ramp Festival in April; and the Cherokee Voices Festival in June. Cherokee artisans have been widely recognized for their traditional basketry, weaving, and stamped pottery. The Qualla Arts and Crafts Mutual, a Cherokee-operated artists' cooperative, plays an important role in promoting the quality and authenticity of Cherokee crafts. Traditional storytelling in the Cherokee language, as well as in English, also remains an important part of the living heritage of the Cherokee. The legality of gaming on Indian land, established by the Indian Gaming Act of 1988, has had a huge economic impact on the Cherokee, as thousands of people from around the country visit the Harrah's Cherokee Great Smoky Mountains Casino and other establishments in Cherokee every year. The growth of business interests surrounding the casinos, such as hotels and restaurants, has allowed more tribal members access to higher salaries and benefits, as well as improved health care and educational opportunities.