In 1922, a Hearst newspaper truck from New York City delivered a petition to the Capitol bearing more than one million signatures in support of a bonus for World War I veterans. Momentum had been building for several years for the federal government to compensate servicemen for the difference they lost between pay in the military versus their civilian jobs. The document simply read: “We respectfully petition Congress to pass the soldiers’ bonus act without further delay, and also to levy a sales tax to obtain the money to pay the bonus.

After heated debate, Congress passed a bonus, but President Warren Harding vetoed it. In May 1924, Congress again passed a bonus, and this time overrode the veto of President Calvin Coolidge. The payment -- which provided veterans $1.25 per day for service overseas and $1 per day for domestic service -- was deferred by the law until 1945. 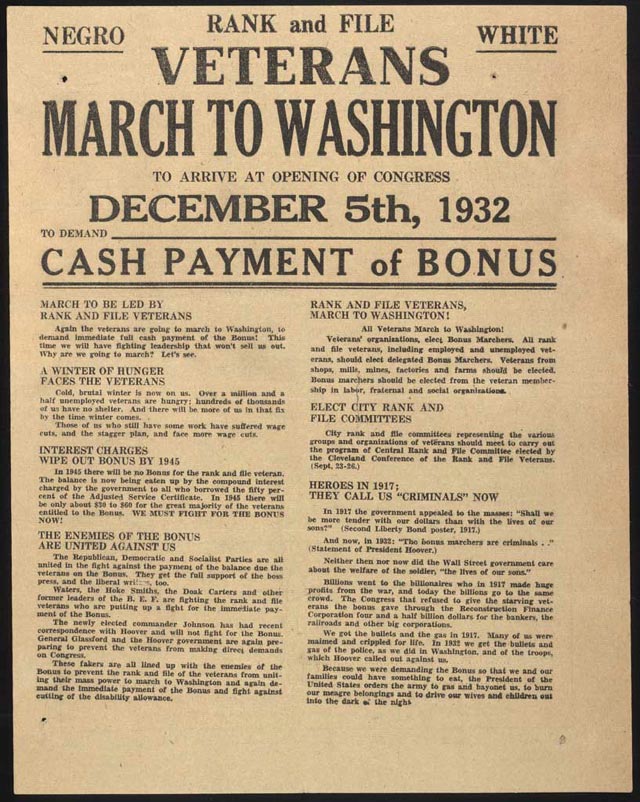 The organizers of the "Bonus Army" published this broadside to explain their purpose and recruit marchers.

The issue was reopened in the early 1930s, when out-of-work veterans suffering the effects of the Great Depression marched on Washington to demand an immediate payment of their bonus. This "Bonus Army" consisted of some 15,000 to 20,000 World War I veterans from across the country. They arrived in the capital in in June 1932 and set up camp on the Mall.

Six futile weeks of lobbying Congress raised government fears of riots. On July 28, cavalry, infantry, tank troops and a mounted machine gun squadron commanded by General Douglas MacArthur and Major Dwight Eisenhower dispersed veterans and their families with bayonets and tear gas. MacArthur was convinced that the men were communists, despite his commanders' repeated reports to the contrary. According to journalist and eyewitness Joseph C. Harsch, "This was not a revolutionary situation. This was a bunch of people in great distress wanting help.... These were simply veterans from World War I who were out of luck, out of money, and wanted to get their bonus -- and they needed the money at that moment."

Public opinion denounced President Herbert Hoover for the resulting bloodshed. Audiences in movie theaters booed newsreel footage of soldiers expelling the Bonus Army from their camps. One woman wrote the editor of the Washington Daily News, "I voted for Herbert Hoover in 1928. God forgive me and keep me alive at least until the polls open!"1 Hoover, already deeply unpopular, would lose the election that fall to Franklin Roosevelt in a landslide. 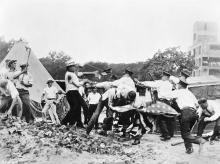