The powerful emotions that swept over participants in revivals often had “peculiar physical manifestations” called “the exercises.” Sometimes the affected person fell down; sometimes the exercises involved dancing, “jerking,” barking like a dog — or even proposals of marriage, as Johnson describes here.]

In a few instances, congregations in North Carolina were subject to extreme exercises, such as the marrying exercise… One afflicted with the marrying exercise professed to have a revelation that the Lord wished him to marry a certain person, and the person thus designated felt compelled to consent to the marriage for fear of being damned. “Thus,” wrote the Reverend Joseph Moore to the Reverend Jesse Lee in 1806, “many got married, and it was said some old maids, who had nearly gotten antiquated, managed in this way to get husbands.” (p. 400)

On the first day of a camp meeting in North Carolina all roads leading to the grounds were clotted with people hurrying to the meeting, some on foot carrying their shoes in their hands; others on horseback with a child in front and a bundle of provisions behind; still others in wagons and carts, some drawn by horses, others by oxen, vehicles crowded with women and children and piled high with equipage. The camp ground was heavily wooded; near by was a creek and spring of water. Men and women were tethering horses, erecting tents, cooking meals for the day. Children were frolicking about, in and out among the wagons, frightfully near the horses' heels.

Not far off women were already beginning to find their places on the rude plank seats in front of the "stage." They were leaving vacant a few seats in front. Those were the "anxious benches." Here the "convicted" [those whom God had chosen for conversion] would come to be prayed for when the preacher issued the invitation for "mourners." The only covering over the arbor sheltered the pulpit. On the stage was a knot of men solemnly shaking hands and conversing. On all sides of the arbor, row after row of vehicles crowded one another. Men were standing everywhere. The music struck up, quavering; mostly female voices singing two lines at a time as the deacon read them off. After another hymn, a preacher arose and the men came filing in, taking their seats on the opposite side of the arbor if the women had not filled them all; or crowding into the aisles and back of the seats occupied by their women folk. The minister, an ordinary looking man, dragged out an ordinary address while whispered conversations hummed louder and louder. Infants wailed fretfully. A dog fight started somewhere among the wagons.

At length the evangelist arose. At once the congregation was electrified. "And what come ye out into the wilderness for to see?" he asked, fixing his eyes upon the congregation. His voice rose powerfully, "Ayr! ye are come as to a holiday pageant, bedecked in tinsel and costly raiment. I see before me the pride of beauty and youth; the middle-aged,... the hoary hairs and decrepit limbs of age; -- all trampling -- hustling each other in your haste -- on one beaten road -- the way to death and judgment! Oh! fools and blind! slow-worms, battening upon the damps and filth of this vile earth! hugging your muck rakes while the Glorious One proffers you the Crown of Life!" Women were in tears. "That's preaching!" shouted a gray-haired man. "Lord, have mercy!" another besought.

With words of doom yet upon his lips, the preacher suddenly stopped. A female voice began a spiritual:

This is the field, the world below,— Where wheat and tares together grow; Jesus, ere long, will weed the crop, And pluck the tares in anger up.

With a mighty roar the congregation burst into the chorus:

For soon the reaping time will come, And angels shout the harvest home!

The preachers had come down from the stage. "Sinners come home!" they shouted above the surge of the song. They went through the congregation shaking hands, singing as they went:

For soon the reaping time will come, And angels shout the harvest home!

Nerves were taut. The tumult rose. Shouts of thanksgiving and wails of despair joined with the ever recurring pulse of the song. Now a minister was praying; now he was shouting, "Washed in the blood of the Lamb!" One after another, weeping mourners arose and flung themselves in front of the anxious seats.

It was now two o'clock. After a brief intermission, while the ministers and their helpers continued to labor with the seekers, there would be prayer and exhortation. At candle-light pine torches would be lighted and there would be preaching again. So far, no one had "come through." The ministers had hardly expected it. That would not come until the third or fourth day of the meeting. 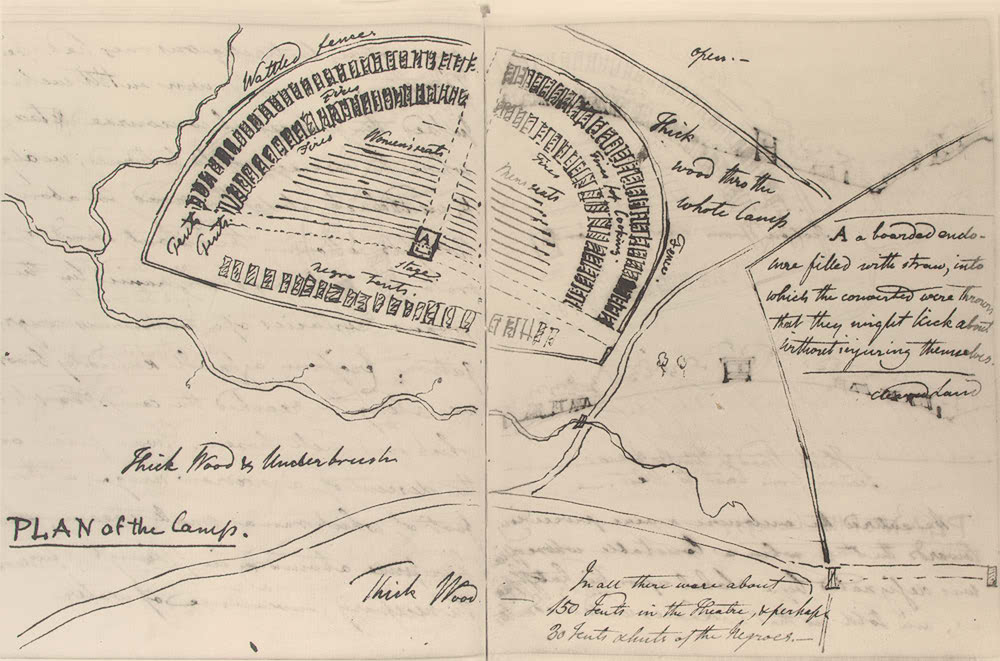 This sketch shows the layout of a camp meeting in Fairfax, Virginia, in 1809. Latrobe also noted, to the right of the main camp, "a boarded enclosure filled with straw, into which the converted were thrown that they might kick about without injuring themselves." Note also that seating was to be segregated. 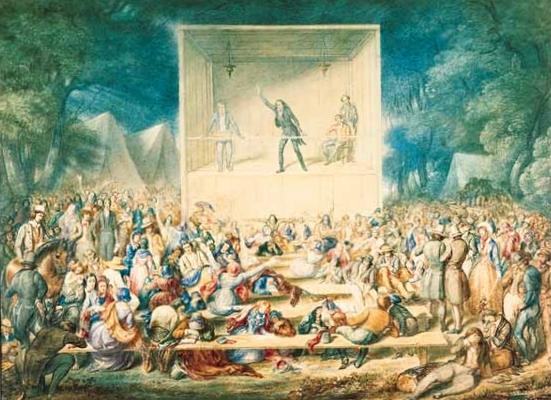 The English artist who painted this 1839 watercolor said that it shows "a camp meeting, or religious revival in America, from a sketch taken on the spot." 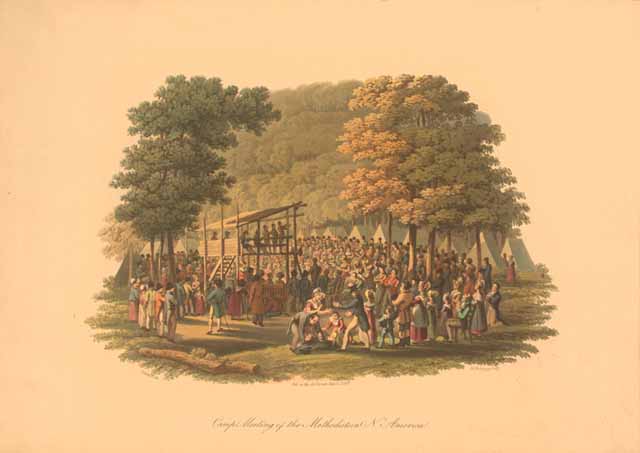 Detail from an illustration of a Methodist camp meeting, 1819. Compare this to the above painting.​What impressions do these illustrations give of camp meetings? Can you tell what the artists' opinion of revivals might have been?