Jimmy Carter, former Democratic governor of Georgia, won the presidency in 1976. Portraying himself during the campaign as an outsider to Washington politics, he promised a fresh approach to governing, but his lack of experience at the national level complicated his tenure from the start. A naval officer and engineer by training, he often appeared to be a technocrat, when Americans wanted someone more visionary to lead them through troubled times.

In economic affairs, Carter at first permitted a policy of deficit spending. Inflation rose to 10 percent a year when the Federal Reserve Board, responsible for setting monetary policy, increased the money supply to cover deficits. Carter responded by cutting the budget, but cuts affected social programs at the heart of Democratic domestic policy. In mid-1979, anger in the financial community practically forced him to appoint Paul Volcker as chairman of the Federal Reserve. Volcker was an "inflation hawk" who increased interest rates in an attempt to halt price increases, at the cost of negative consequences for the economy.

Carter also faced criticism for his failure to secure passage of an effective energy policy. He presented a comprehensive program, aimed at reducing dependence on foreign oil, that he called the "moral equivalent of war." Opponents thwarted it in Congress.

Though Carter called himself a populist, his political priorities were never wholly clear. He endorsed government's protective role, but then began the process of deregulation, the removal of governmental controls in economic life. Arguing that some restrictions over the course of the past century limited competition and increased consumer costs, he favored decontrol in the oil, airline, railroad, and trucking industries.

Carter's political efforts failed to gain either public or congressional support. By the end of his term, his disapproval rating reached 77 percent, and Americans began to look toward the Republican Party again. 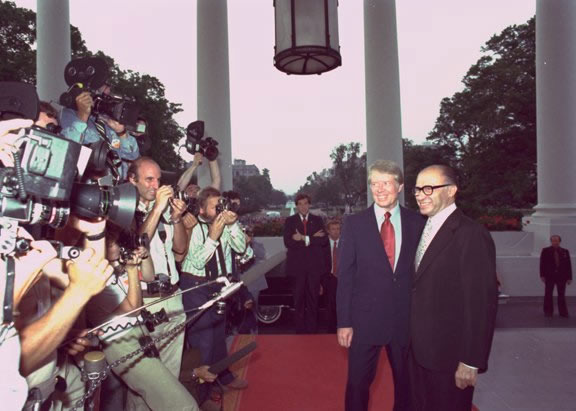 Jimmy Carter and Israeli Prime Minister Menachem Begin are met by photographers at the White House.

Carter's greatest foreign policy accomplishment was the negotiation of a peace settlement between Egypt, under President Anwar al-Sadat, and Israel, under Prime Minister Menachem Begin. Acting as both mediator and participant, he persuaded the two leaders to end a 30-year state of war. The subsequent peace treaty was signed at the White House in March 1979.

After protracted and often emotional debate, Carter also secured Senate ratification of treaties ceding the Panama Canal to Panama by the year 2000. Going a step farther than Nixon, he extended formal diplomatic recognition to the People's Republic of China.

But Carter enjoyed less success with the Soviet Union. Though he assumed office with detente at high tide and declared that the United States had escaped its "inordinate fear of Communism," his insistence that "our commitment to human rights must be absolute" antagonized the Soviet government. A SALT II agreement further limiting nuclear stockpiles was signed, but not ratified by the U.S. Senate, many of whose members felt the treaty was unbalanced. The 1979 Soviet invasion of Afghanistan killed the treaty and triggered a Carter defense build...˜up that paved the way for the huge expenditures of the 1980s.

Carter's most serious foreign policy challenge came in Iran. After an Islamic fundamentalist revolution led by Shiite Muslim leader Ayatollah Ruhollah Khomeini replaced a corrupt but friendly regime, Carter admitted the deposed shah to the United States for medical treatment. Angry Iranian militants, supported by the Islamic regime, seized the American embassy in Tehran and held 53 American hostages for more than a year. The long-running hostage crisis dominated the final year of his presidency and greatly damaged his chances for re-election.