Service in the Marine Corps brought men like Obie Hall, who enlisted from the cities of the North where race relations were somewhat relaxed, into contact with segregation at its harshest. Hall received a sleeping-car ticket for the rail journey from Boston to the training site in North Carolina, and all went well until he reached Washington, D.C., where he was ordered out of his assigned berth. A porter, also an African-American, explained that Hall had reached the "black line" south of which rail travel was segregated. The porter, in defiance of the law and social custom of that time, found an empty compartment that Hall occupied for the rest of the trip. Some 18 months later, John R. Griffin of Chicago did not find a sympathetic porter willing to break the rules; at Washington he had to transfer to a Jim Crow car, "hot, dirty, crowded (with babies crying and old men drinking and [black] Marines discussing the fun they had on leave)."

Segregation prevailed at the Marine Barracks, New River, North Carolina — soon redesignated Camp Lejeune — where the African Americans would train, and in the nearby town of Jacksonville. For the black recruits, the Marine Corps established a separate cantonment, the Montford Point Camp, in westernmost Camp Lejeune. At least one Marine veteran, Lieutenant General James L. Underhill, suggested in retrospect that the Corps made a mistake in pushing them "off to one corner," for doing so reinforced the belief, accurate though it was, that blacks were not truly welcome. The Marine Corps, Underhill believed, "should have dressed them up in blue uniforms and put them behind a band and marched them down Fifth Avenue" to show their pride in being Marines and their acceptance by the Corps. At the time, as Underhill surely realized, neither the Marine Corps nor much of American society was ready for such a gesture of racial amity.

The Montford Point Camp consisted at first of a headquarters building, a chapel, two warehouses, a mess hall, a dispensary, a steam generating plant, a motor pool, quarters and recreational facilities for the white enlisted men who initially staffed the operation, a barber shop, and 120 green-painted prefabricated huts, each capable of accommodating 16 recruits, though twice that number were sometimes jammed into them, pending the completion of new barracks. The original camp also boasted a snack bar that dispensed beer, a small club for the white officers, and a theater, one wing of which was converted into a library. As the black Marines cleared the land around the camp, they encountered clouds of mosquitoes, a variety of snakes, and the tracks of an occasional bear, if not the animal itself. To the north of the original site, across a creek, lay Camp Knox, occupied during the Great Depression of the 1930s by a contingent of the Civilian Conservation Corps, an agency that put jobless young men to work, under military supervision, on public improvements and reclamation projects. As the number of African-American Marines increased, they spilled over into the old CCC camp.

Railroad tracks divided white residents from black in segregated Jacksonville. Suddenly, hundreds of African-American Marines on liberty appeared on the white side of the tracks, looking for entertainment. At first, white businessmen reacted to this sight by bolting their doors. Even the bus depot shutdown until some one realized that the liberty parties might well find other North Carolina towns like New Bern or Wilmington more attractive than Jacksonville, and the ticket agents went back to work.

Getting out of Jacksonville became easier, but returning to camp from the town proved difficult on a Jim Crow bus line. Drivers gave priority to white passengers, as state law required, and restricted black passengers to the rear of the bus, unless whites needed the space. Since the two races formed separate lines at the bus stop, drivers tended to take only whites on board and leave the black Marines standing there as the deadline for returning to Montford Point drew nearer. When this happened, angry black Marines, at the risk of violence from the local police, might commandeer a bus, remove the driver, and take it to the gate nearest Jacksonville, where the transit company could retrieve it on the next morning. The white officer in command at Montford Point, Colonel Samuel A. Woods, Jr., took steps to ensure that the black Marines could return safely to Montford Point without risking arrest. He sent his battalion's trucks into town to pick up the men and assigned white non-commissioned officers from the staff at Montford Point to the military police patrols that kept order in the town. The NCOs detailed by Colonel Woods helped deter local authorities from making arbitrary arrests of black Marines. As black noncommissioned officers became available, one of them accompanied each patrol, though unarmed and without authority to arrest or detain white Marines.

Although race also affected relationships among Marines, especially during the early months of the Montford Point Camp, instances of the racial harassment of black Marines became increasingly less frequent. The improved conditions resulted in part from Montford Point's isolation, but it also reflected the efforts of the African-Americans to impress their white fellow Marines. Obie Hall recalled that the men of Montford Point tried to look their sharpest, especially when in the presence of white Marines. "They really put that chest out," he said. Pride in appearance had beneficial effects, for one white Marine remarked that, although he only saw blacks when they were on liberty because of the segregation on Camp Lejeune, "they always looked sharp." The white military police remained unimpressed, however. They tended to share the racial attitudes of their civilian counterparts, and the persistent hostility generated intense resentment among the African-American Marines.

Knowledge that they would have to overcome racism to gain the right to serve created a feeling of solidarity among black Marines. At times, they could invoke this unity to right a wrong, as happened after the officer of the day at Montford Point, angered by what he considered raucous behavior during a comedy being shown at the camp movie theater, had the black audience take their buckets — these utilitarian possessions at the time were serving as seats — and put them over their heads. The recently appointed black drill instructors reacted by ordering their Marines to clean the barracks instead of attending a show being staged especially for them by black performers. When Colonel Woods heard of the impromptu field day, he investigated, learned of the ill considered action by the officer of the day, and made sure the African-Americans attended the performance.

One incident painfully reminded the African-Americans of their second-class status in the Marine Corps, indeed throughout a Jim Crow society. A boxing show staged at the Montford Point Camp attracted a distinguished guest, Major General Henry L. Larsen, who had taken command of Camp Lejeune after returning from the South Pacific. During an informal talk, he made what he considered a humorous remark, but his audience interpreted it as an insult. According to one of the black Marines who was there, the general said something to the effect that when he returned from overseas he had seen women Marines and dog Marines, but when he saw "you people wearing our uniform," he knew there was a war on. The off-hand comment may have served, however, to bring the men of Montford Point even closer together.

Oddly enough, a white officer came the closest to capturing the isolation felt by blacks in segregated North Carolina. Robert W. Troup, in peacetime a musician and composer who had played alongside black performers, accepted a wartime commission and reported to Montford Point, where he made a lasting impression. One of the African-American Marines, Gilbert H. Johnson, considered him a "topnotch musician, a very decent sort of officer," and another, Obie Hall, described him as "the sharpest cat I've ever seen in my life." Bobby Troup's song "Jacksonville," the unofficial anthem of men of Montford Point, included the heartfelt plea:

While assigned to the 51st Defense Battalion (Composite), the African-American defense battalion authorized in 1942, Troup doubled as recreation officer, organizing baseball and basketball teams, arranging the construction of sports facilities, and staging shows using talent available at Montford Point. Perhaps the most popular performer was Finis Henderson, a private who had sung and tap-danced in Metro-Goldwyn-Mayer films. As the star of one of Troup's shows, Henderson sang "Jacksonville" while stage hands threw bits of brown paper into the airflow from a pair of electric fans to simulate the dust blowing down the street of that much-despised town. In December 1944, Troup took command of the black 6th Depot Company — the second unit with that designation — which deployed to Saipan and handled supplies at the base there.

From The Right to Fight: African-American Marines in World War II, by Bernard C. Nalty. 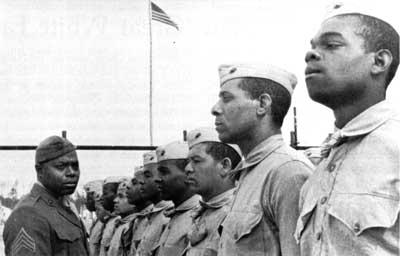 Sgt. Gilbert H. “Hashmark” Johnson, a veteran of service in both the Army and Navy, glares at the boots in his recruit platoon. He became a Marine in 1942.

Who Were the Montford Point Marines?

from the United States Marine Corps

The Right to Fight: African-American Marines in World War II

This UNC-TV documentary looks at the experiences of black North Carolinians in World War II. Footage from Black Issues.

Executive Order 8802: Prohibition of Discrimination in the Defense Industry (1941) 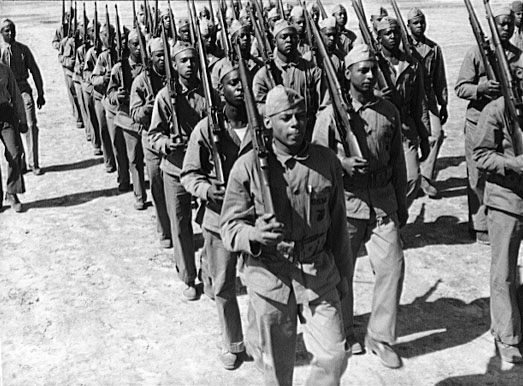 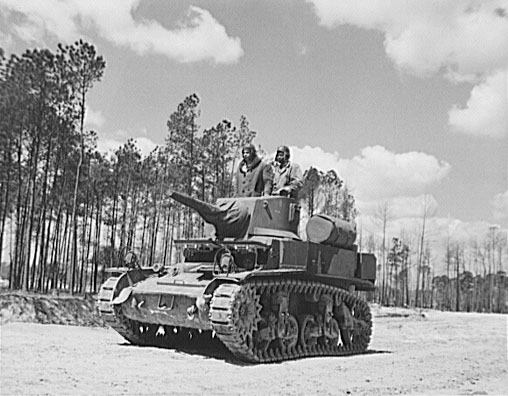 Marine recruits at Montford Point with a 90mm anti-aircraft gun.